DoorDash Inc. reported fourth-quarter revenue that beat analysts’ estimates, reflecting a surge in COVID-19 cases and restrictions that fueled demand for food delivery at the end of last year. But its losses also more than doubled from a year earlier.

Sales increased 225 per cent in the three months ended Dec. 31 from a year earlier, totaling US$970 million, the company said in its first financial report since becoming a public company in December. Analysts had projected US$926.7 million according to data compiled by Bloomberg. Customers placed 273 million orders in the period, a 233 per cent increase, with the gross value of those orders at US$8.2 billion. DoorDash reported a net loss of US$312 million, widening from US$134 million a year earlier. The net loss per share was US$2.67.

San Francisco-based DoorDash has benefited from the coronavirus pandemic as lockdowns have shuttered restaurants and left more people ordering their meals to be delivered. A resurgence of cases and tightened restrictions at the end of last year only continued to feed the boom in demand. DoorDash expanded its market share to surpass 50 per cent of the U.S. last month, up from 35 per cent in January 2020, according to data from Edison Trends. A strong presence in the suburbs helped the company weather the lockdowns better than some of its rivals, as many Americans fled from cities.

DoorDash ended last year with a high-profile initial public offering, raising US$3.4 billion. Its shares have gained 66 per cent since then, valuing the company at US$53 million. They slid 7 per cent in extended trading after the results were published. 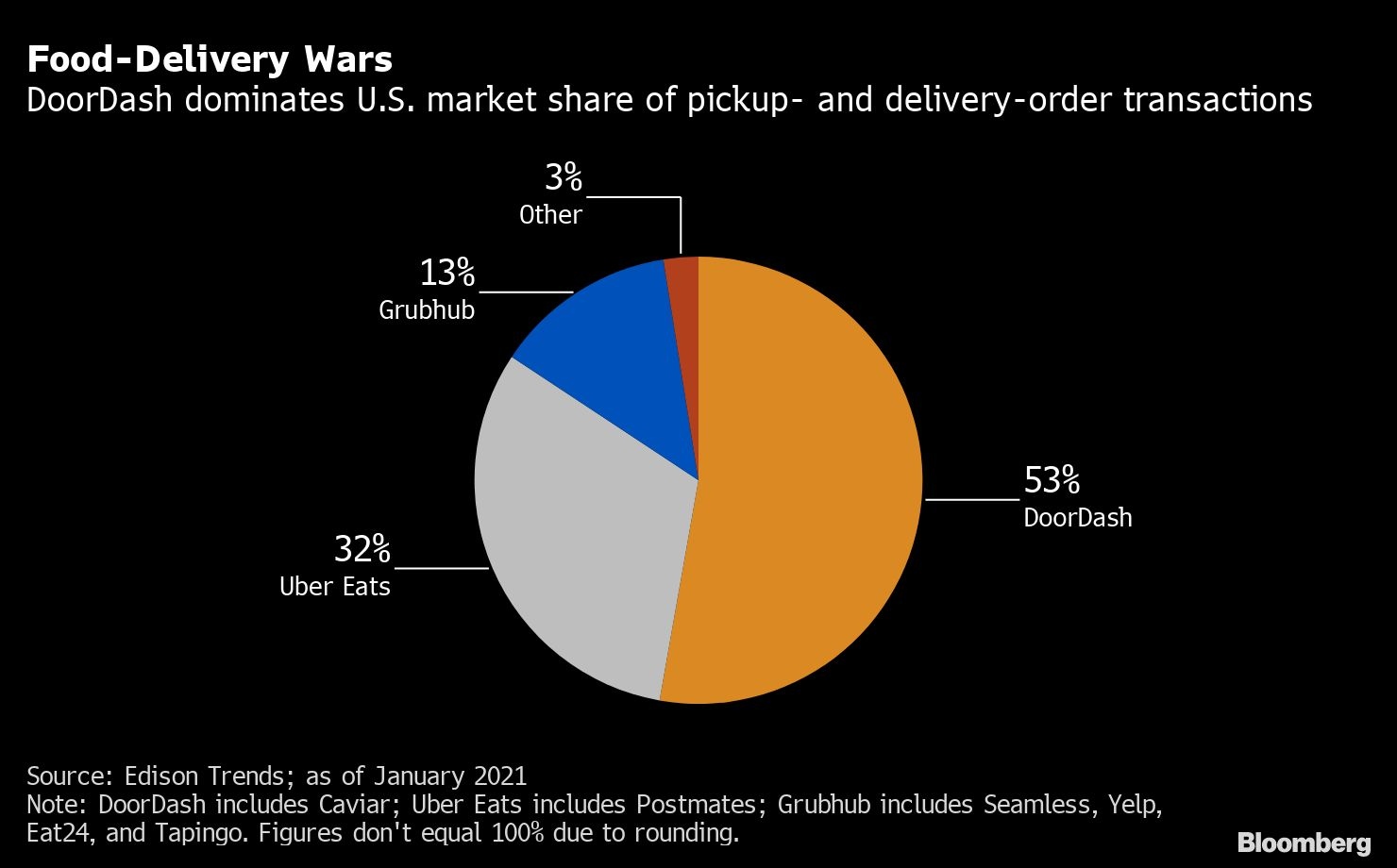 The big question for investors is whether desire for food delivery will continue in a post-pandemic world, said Ronald Josey, an analyst at JMP Securities. Josey said he anticipates a “big slowdown” in growth in 2021, but is optimistic about long-term prospects.

“We’ve been ordering out now for the better part of a year. I don’t think that goes away,” Josey said.

DoorDash may have a better revenue stream than some of its competitors as COVID-19 restrictions fade in the U.S., due to 5 million subscribers to its DashPass delivery subscription service, said Bloomberg Intelligence analyst Matthew Martino. Analysts at Truist Financial called the DashPass a “critical piece of differentiation” from other services.

Uber Technologies Inc., whose Uber Eats is the second-biggest meal delivery service in the U.S., has been heavily investing in its delivery segment. The company recently acquired alcohol-focused Drizly, Inc. for US$1.1 billion and grocery-focused Cornershop. That came on top of the June 2020 acquisition of food delivery company Postmates Inc. for US$2.6 billion. In October, DoorDash teamed up with Sam’s Club to offer same-day prescription delivery.

DoorDash reported adjusted earnings before interest, taxes, depreciation and amortization of US$94 million.