DoorDash moves ahead with IPO on NYSE

The shop’s owner showed them pages and pages of delivery orders she hadn’t been able to fulfill. Demand wasn’t high enough to hire a full-time delivery person, but there was no way she could drop off all the orders herself. It was a story the three heard again and again as they worked to understand how they could leverage technology to help small businesses.

They decided to build a basic web page with menus from local restaurants to see if there was demand for a delivery business. “It was super simple, ugly, and honestly we weren’t really expecting anything,” Tang said at a Stanford lecture years later. “All of a sudden we got a phone call - someone called! They wanted to order Thai food.”

Now, those three are billionaires as the company they founded -- San Francisco-based DoorDash Inc. -- goes public, having grown into the leading delivery company in the U.S. DoorDash sold 33 million shares Tuesday for US$102 each in an initial public offering, raising US$3.37 billion.

Other investors who stand to benefit from the IPO include Sequoia Capital, Softbank’s Vision Fund and Yuri Milner’s DST Global. DoorDash, which was valued privately in June at US$16 billion, would be worth about US$38 billion at the offering price on a fully diluted basis. 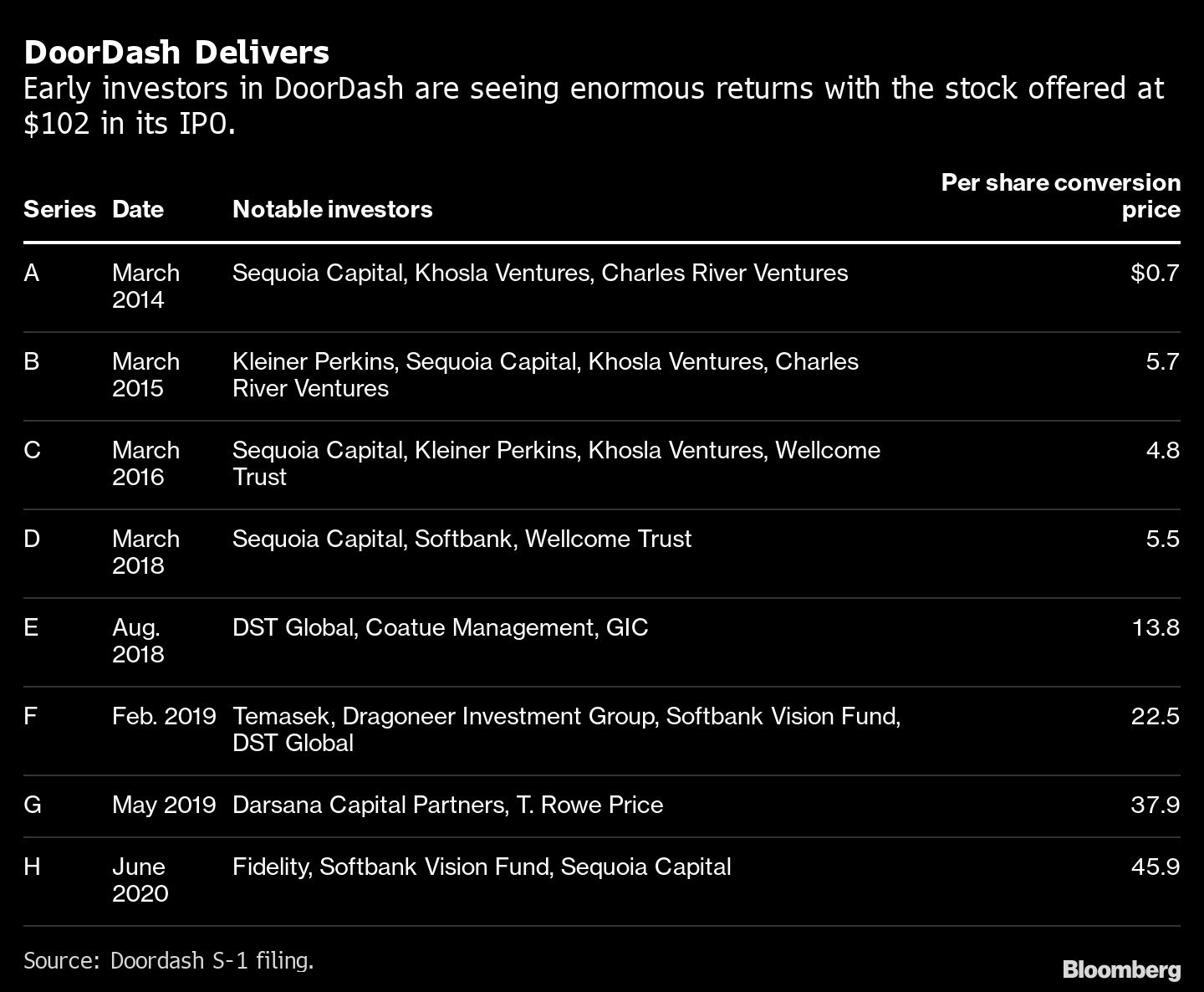 The founders made that first delivery of prawn pad thai themselves, juggling the rapidly growing business with the demands of their studies.

“We would go to class, and then after we would go deliver food,” Tang said. “We were the customer support. I sometimes had to take phone calls during lectures. We spent afternoons going down University Avenue just passing out flyers, trying to promote DoorDash.”

They continue to encourage all their employees to make deliveries, engage in customer support or other front-line tasks at least once a month.

The business grew rapidly, expanding across the U.S. and into Canada and Australia, but it received an unexpected boost this year as the coronavirus pandemic kept people away from restaurants, instead ordering food on their smartphones. Total revenue in the nine months ended Sept. 30 was US$1.9 billion, compared with US$587 million in the same period last year. The company’s second quarter was the first profitable one in its history.

To support its merchants and delivery people during COVID, DoorDash said it cut commission costs for certain businesses and increased driver payments. Still, the company has been accused by some restaurants of squeezing them for profits when they’ve been otherwise unable to open for normal in-store service.

The three founders each own stakes worth US$1.4 billion to US$1.5 billion based on the IPO price, according to the Bloomberg Billionaires Index. Xu has voting authority over all Class B shares, filings show, giving him control of the company with 69% of the voting power.