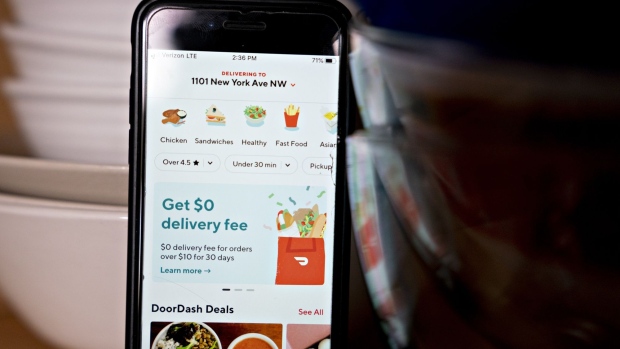 (Bloomberg) -- There aren’t many jobs in Davidson, North Carolina, that offer the flexibility and decent pay that Alfonso Auz was looking for. He tried a bunch of gigs, including driving for Uber, before eventually settling on DoorDash Inc. Auz, 47, usually makes at least $150 a day delivering food from restaurants in his hometown, without having to commute to the nearest job center, Charlotte, 40 minutes away. “I usually turn on the app while I’m still at home,” Auz said.

Towns like Davidson are at the center of a strategy that secured DoorDash a firm position atop the U.S. food delivery market, said Tony Xu, DoorDash’s chief executive officer. The suburbs, he said, were underestimated by competitors, giving DoorDash the opportunity to forge nationwide exclusivity deals with the likes of the Cheesecake Factory and Chili’s. “While our competitors focus on the cities, we focused on the suburbs,” said Xu. “That’s how we were able to become the market leader.”

The other part of the strategy, according to analysts, rival businesses and venture capitalists, involves a war chest of about $2 billion. That’s how much DoorDash has received from investors in the six years since the business was established, and almost two-thirds of it came in the last 18 months. SoftBank Group Corp., the Japanese conglomerate whose investments have reshaped Silicon Valley, took an interest in DoorDash last year and helped lift the valuation of the unprofitable company to $12.6 billion this past May. Other backers include Sequoia Capital and Singaporean government investment funds.

Today, DoorDash is the prime example of SoftBank’s investing philosophy seeming to work as intended. Behind SoftBank’s $100 billion tech fund is the idea that an ample supply of money can propel a company to the top of a market. DoorDash accounts for 35% of online food delivery sales in the U.S., according to Edison Trends, a market research firm. DoorDash’s rise has come at the expense of the other major delivery apps from Uber Technologies Inc., Grubhub Inc. and Postmates Inc., which have all lost share in the last year. DoorDash is in 4,000 towns, compared with 500 cities for UberEats. “DoorDash came out of nowhere,” said Hetal Pandya, an analyst at Edison Trends.

Critics say DoorDash followed the SoftBank model down a destructive path of growth at all costs and a backward business model that doesn’t account for profit. DoorDash may find itself unpalatable to public market investors, who have largely turned against big unprofitable stocks. The company has been eyeing an initial public offering next year. “We believe we have the right unit economics to enable us to build a sustainable and profitable business,” said a spokeswoman for DoorDash.

DoorDash’s spending has impacted competitors. Grubhub shares fell 42% last week in their biggest one-day drop ever, after the company gave a dismal forecast and published an unusual, 10-page manifesto signed by the CEO and financial chief. In it, they throw shade at competitors, saying Grubhub is the only profitable food delivery business. A week later, Uber reported fewer-than-expected food delivery orders in an otherwise favorable quarter. The stock fell to an all-time low the next day.

Fast food restaurants aren’t faring much better. Delivery apps charge restaurants fees, sometimes as much as 30% of sales, which cut into profit margins. That has pushed larger chains to negotiate lower fees in exchange for exclusive agreements, as Shake Shack Inc. did with Grubhub. However, going with the third-place app contributed to an underwhelming quarter and reduced sales targets for the burger chain, whose stock dipped 21% Tuesday. The old-fashioned way of hiring drivers isn’t a reliable option, either. The CEO of Papa John’s International Inc. said Wednesday that a shortage of drivers is forcing the pizza company to work with the app providers.

Just a few years ago, DoorDash was struggling to find investors and agreed to cut its share price to raise capital. By late last year, annual sales had tripled. But questions remain about how sustainable the business is. Over the summer, a DoorDash investor prepared an informal presentation arguing the merits of a sale of the company to Uber, according to a copy of the document obtained by Bloomberg.

Uber, which also counts SoftBank as its largest shareholder, is sitting on $12.7 billion in cash, and its CEO, Dara Khosrowshahi, told analysts on a conference call this week that the company is open to acquisitions in food delivery. However, Khosrowshahi has also committed to cut spending in service of turning a profit by 2021. Representatives for the companies declined to comment on the prospect of a merger. Mike Walsh, an early Uber investor, said DoorDash is probably too big for Uber to swallow.

Instead, DoorDash made a purchase of its own. The company spent $410 million in August for Caviar, a food delivery app owned by Square Inc. “We have a lot of money in the bank,” said Xu, the DoorDash CEO. “We are in no rush to spend it all.”

Geographic comprehensiveness comes at no small expense to DoorDash, but it’s what draws many restaurant operators to the app. About 80% of Chili’s locations are in the suburbs, and DoorDash is helping bring in customers who may not otherwise eat there, said Steve Provost, the chief concept officer for Chili’s parent company Brinker International Inc. “The idea of non-pizza delivery in the suburbs is a relatively new phenomenon,” he said.

DoorDash’s sprawl throughout American suburbia hasn’t hurt its position in major cities, though. Holly Richards, a 29-year-old executive assistant in San Francisco, said she prefers DoorDash because of its competitive prices, wide selection and, most importantly, its generous refund policy. UberEats would only give her a 20% off coupon when she complained that her Indian dumplings arrived cold, Richards said: “DoorDash is the only company that has offered me a full refund for food that did not arrive in a timely matter.”

--With assistance from Leslie Patton and Lizette Chapman.

To contact the author of this story: Candy Cheng in San Francisco at ccheng86@bloomberg.net