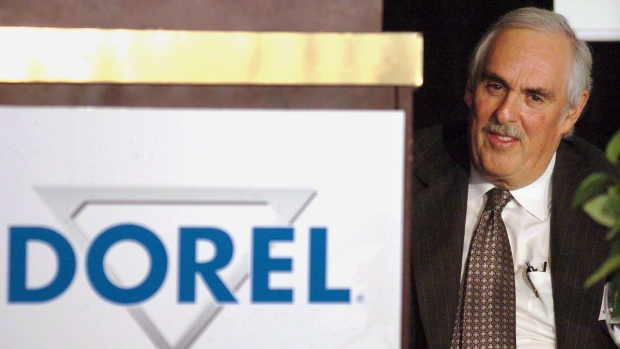 Dorel President and CEO Martin Schwartz attends the company's annual meeting in Montreal, on May 28, 2004. , THE CANADIAN PRESS/Francois Roy

MONTREAL -- Dorel Industries said Friday its board has agreed to a deal that will take the Montreal-based company private.

Under the agreement, a group led by an affiliate of Cerberus Capital Management LP will buy Dorel for $14.50 per share in cash, except for shares owned by members of the Schwartz family, including Dorel's chief executive officer. The deal values the company at $470 million.

Dorel's subordinate B shares traded at $14.42 on the Toronto Stock Exchange after markets opened Friday, up 3 cents from the previous close.

"We are pleased to have been able to reach this agreement with the buyer group at a time when Dorel is benefiting from increased demand for its products amid the unique backdrop of 2020," said Norman Steinberg, who chaired the board committee reviewing the deal, in a statement.

"The special committee believes that the arrangement represents fair value for the public shareholders and is the best path forward for Dorel and all of its stakeholders."

Dorel makes a variety of consumer goods such as Cosco and Safety 1st child car seats, Cannondale and Schwinn bicycles, and home furniture under brands such as Dorel Living and DHP.

Dorel says $14.50 is the highest offer to buy the company and is in line with analyst valuations.

Dorel announced last year that the controlling shareholders, led by CEO Martin Schwartz, were seeking financial partners to help buy the publicly traded shares that they didn't own.

Martin Schwartz said in Friday's statement that the deal with Cerberus is a win for all stakeholders, including those with publicly traded shares, after more than 25 potential financial sponsors and partners were vetted.

"This transaction will enable Dorel to continue to serve our employees, business partners and other stakeholders, and positions Dorel on a path for continued growth," Schwartz said.

Dorel recently reported third-quarter revenue growth of 9.9 per cent compared to the same time last year, as it struggled to keep up with demand for bicycles and home furniture amid shifting consumer spending patterns related to the COVID-19 pandemic.

The transaction needs approval by two-thirds of the votes cast, and more than 50 per cent of the votes cast by non-family shareholders, at a special meeting in January. It also needs court approval.

The transaction has faced resistance from Dorel's second-largest shareholder, Montreal-based investment firm Letko, Brosseau & Associates Inc. The firm said on Nov. 3 that Dorel has a resilient business and the controlling family's desire to remain shareholders under the go-private plan is proof that the company has long-term potential.

Dorel said the purchasing group will receive a termination fee of $14.1 million if the board accepts a superior proposal from another group. The buyers would pay Dorel a $23.6 million termination fee if the agreement doesn't close under certain circumstances.