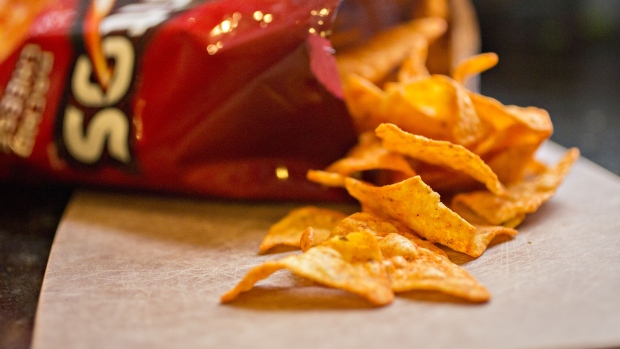 A bag of PepsiCo Inc. Doritos brand snack chips is arranged for a photograph in Tiskilwa, Illinois, U.S., on Wednesday, Sept. 28, 2016. PepsiCo Inc. is scheduled to release earnings on September 29. , Daniel Acker/Bloomberg

Why should society permit the existence of food companies that contribute to poor health? The standard answer is that people should be allowed to make bad choices about what they eat and drink. But that’s a slippery defense when the consumers are children and the choices they face are loaded against their wellbeing, as Thursday’s British government report on childhood obesity makes clear.

The snacks industry — from Mondelez International Inc. to Coca-Cola Co. and from Nestle SA to the Kraft Heinz Company — needs to rethink its purpose, and strategy, if its license to operate is to endure.

Former U.K. chief medical officer Professor Sally Davies cites multiple causes for a saddening rise in obesity among England’s 10-11-year-olds since 1990. The giant food brands are only part of the problem but that hardly absolves them from leading the solution. As the report says, cheap unhealthy options tend to be the most readily available. Portion inflation is rampant. Advertising or sponsorship is pervasive. Healthy options are often unaffordable for those on low incomes, while the unhealthy options are cheap.

Davies’s recommendations include some radical ideas. The U.K. public faces a possible ban on eating and drinking on public transport. Industry faces calorie caps on food portions consumed “out-of-home,” tiered VAT on unhealthy food, plain packaging and the end of tax deductibility of marketing costs for unhealthy products. These may just be proposals. But the direction of travel is clear.

This is what happens when an industry fails to self-regulate to mitigate its worst effects. Governments wake up. The food and drink industry is a big employer and a big taxpayer. Even so, the economics favor intervention. The medical costs of obesity, coupled with lost productivity, are 3 per cent of global GDP, according to McKinsey research from 2014. Today’s unhealthy children are tomorrow’s sick workforce.

The U.K. Food and Drink Federation, the lobby group, says “punitive action” might hinder continuing the progress the manufacturers have already made in cutting salt, sugar and calories from their products over the last four years. It says the industry must “take the consumer with us.” The question is whether it is taking itself and its customers to an early grave.

The industry needs to see this problem as an opportunity not a threat. First, it should be clear about its role in society. Making treats that people want to eat can be a good reason for a corporation to exist, but not when it adds to a public health crisis. This doesn’t mean PepsiCo Inc. ending production of Doritos. But it does mean defining responsibly what the target market — and age group — is for such products. And it means combining marketing with education.

At the same time, food manufacturers should redouble their efforts to innovate healthier, cost-effective alternatives to sugar and salt. This is a chance for the food giants to think about the huge market for healthy snacks. Food technology has a vital role here and it’s best mediated by the private sector. R&D has already helped, as with the development of Nestle’s so-called hollow sugar.

This week the OECD proposed reforms to corporate taxation, which would allow governments to tax digital companies that generate revenues in countries where they have no physical presence. The food industry faces a similar revenue challenge. Its products will be subject to extra taxes in certain markets until they start to use their well-funded research labs to help meet national health objectives.

It’s not clear that the sector sees obesity as a strategic issue yet. Unilever NV is recycling plastic packaging but still aiming to sell lots more Ben & Jerry’s ice cream. The debate among investors about what stocks to divest centers on fossil fuels right now. If food companies don’t act, they’ll join tobacco and oil in the sin bin.