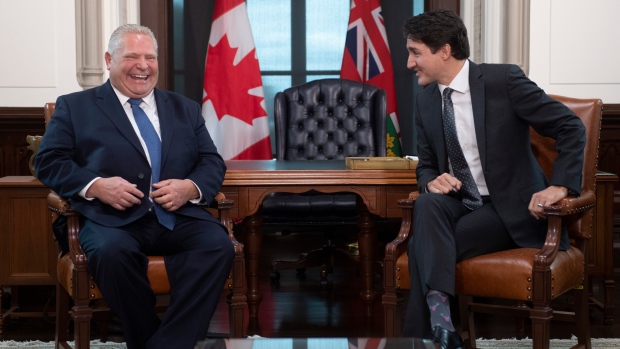 Prime Minister Justin Trudeau and Ontario Premier Doug Ford share a laugh at the start of a meeting in the West Block of Parliament Hill in Ottawa, Nov. 22, 2019. The Canadian Press/Adrian Wyld

OTTAWA -- Ontario Premier Doug Ford said he and Prime Minister Justin Trudeau focused on the things they agree on during their first meeting since the federal election.

Coming out of the meeting in Ottawa this morning, Ford said it is important to send the message to the rest of the world, especially businesses looking to invest, that Canada is a united country.

Ford said he looks forward to gathering with other premiers in Toronto next month, where he hopes they can "lower the temperature" and work together on shared priorities.

The federal Conservatives have accused Trudeau of pitting region and against region with measures like the carbon tax and in the October election Trudeau's Liberals won no seats in Saskatchewan or Alberta. Ford noted he gets along with both Alberta Premier Jason Kenney and Quebec Premier Francois Legault and now, as well as Trudeau.

He also said he knows that many of the people voted for his Progressive Conservative party in the Ontario election last year ended up voting for the Liberals in the federal election. The Ontario Tories dominated in the "905" belt of suburban ridings around Toronto in 2018, and the federal Liberals won nearly all of them a month ago.

The sit-down is the latest in a series of in-person talks Trudeau is having with provincial leaders after receiving a minority mandate last month.

Trudeau has already met with leaders including Saskatchewan Premier Scott Moe and Manitoba Premier Brian Pallister, both of them leaders of conservative parties. Moe emerged from his meeting aggravated, saying he hadn't heard anything new from Trudeau that suggested they could get along better.

On the campaign trail, Trudeau frequently tried to warn voters away from Conservative Leader Andrew Scheer by linking him to Ford, whose popularity has been sinking in recent polls. Ford largely sat the election out, absorbing the attacks quietly.

Toward the end of a photo opportunity before the meeting, Trudeau and Ford shared a laugh as the premier talked about learning French.

Ford asked Trudeau if he knew any good teachers. Trudeau joked that he used to be one, but is a little busy these days.