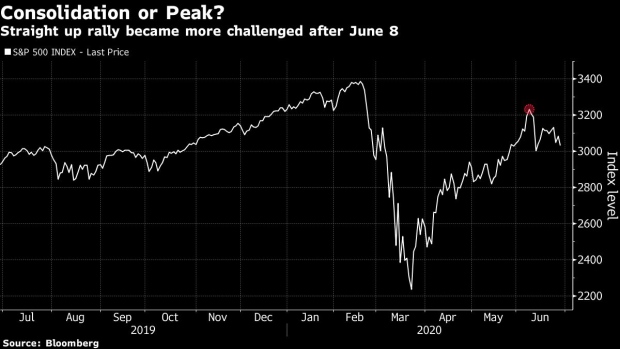 A bear statue stands outside the Frankfurt Stock Exchange, operated by Deutsche Boerse AG, in Frankfurt, Germany, on Friday, March 13, 2020. European equities restored their initial gains as trading remained volatile in the final session of the market’s worst week since the global financial crisis. , Bloomberg

(Bloomberg) -- Back in March, with stocks reeling and no end in sight to the pandemic lockdown or its economic devastation, Doug Ramsey took a look at history and warned his clients they might have a while to wait before a rebound came for equities. Three months later, the S&P 500 is up 35%.

Leuthold Group’s chief investment officer, among the most venerated of Wall Street strategists, is one of many whose historical perspective betrayed them in a market that has defied efforts to divine its path. Models based on past recessions, past valuations, past sentiment and past positioning have proved no use in a straight-up advance that has restored $10 trillion to shares.

Now, for those claiming bragging rights in the recovery, Ramsey has a message: it ain’t over yet. The very things that made picking the bottom all but impossible make it no easier to know when the top is in.

“The bulls could be proved right in that the March 23rd low holds, but you could lose a lot of money in a drawdown here,” said the chief investment officer at Minneapolis-based Leuthold Group. “You could still very easily have a drop of 20% from the peak we made on June 8th. Very easily.”

The warning reflects a wider schism on Wall Street these days. Many of the bears whose jaws dropped over the resiliency of stocks remain steadfastly skeptical, awaiting the moment of vindication. Meanwhile, early believers are running victory laps, doubling down on the rally on the theory skeptics will have to capitulate and stimulus will continue to flow.

By now, everyone’s aware there’s no moment of the past that can be used as a template to tell which way stocks will lurch next.

Just a few days before the March 23 bottom, Leuthold’s Ramsey reiterated to clients that it was “too early” to expect a major bear market trough, as a phase would come when stocks and economic data fell in tandem. A study by the firm showed that on average, over 11 past recessions, stocks didn’t start to recover until 1 1/2 years after the economy started contracting.

Alert for signals that traditionally marked a turning point, he never found them. A typical loss of momentum observable at bear-market lows didn’t materialize. Valuations were particularly misleading. Even at the worst point of the selloff, S&P 500 price-earnings multiples were still roughly 20% above levels seen at the most expensive bear-market low in history, in October 2002.

Other aspects have also been strange, Ramsey says. Initially, defensive stocks led the charge, rather than the common suspects of financials, small-caps, or transports. A breadth thrust signal showing healthy participation also didn’t occur until much later than usual.

Such is the ever-present problem with analyses that hinge on history repeating itself, or at least rhyming. Especially this time around, amid a market crash driven by a disease and parried by copious stimulus, predictions that were informed by past downdrafts turned out to have holes.

Barclays Capital Inc. strategists mapped out a scenario where an extended recession could lead to a 50% peak-to-trough selloff. The farthest the S&P 500 ever fell was 34%. Northern Trust Wealth Management pointed out that it typically takes about 1 1/2 years to recover from a 20% drop. Instead, the S&P 500 rose 40% in 50 days, the fastest rebound in nine decades. Anyone who tried to use 2008 as a road-map was badly burned.

Ramsey isn’t alone in claiming “it’s too early to say” these calls were actually wrong. Strategists and economists at the TS Lombard research shop including Charles Dumas remain bears, expecting a drop of at least 20%. Still, they’ve dropped their March call that the S&P 500 would fall below 2,000 over the summer.

Golub recently raised his year-end price target for the S&P 500 to 3,200 from 2,700, a level that tied as the most bearish forecast among strategists tracked by Bloomberg. With the S&P 500 falling below 2,240 at the worst point, Golub was able to picture a jump of 20% or so by the end of 2020. A rebound double the size? That was an outcome harder to imagine.

“Do I think that collectively the sell-side has gotten the story right? I think it’s been brilliant, really gotten the earnings right, really gotten the narrative right -- and most people even assumed we’d get a huge bounce,” Golub said. “The question is how do you calibrate a 20% bounce versus a 40% bounce in a short period of time? That’s really very difficult.”