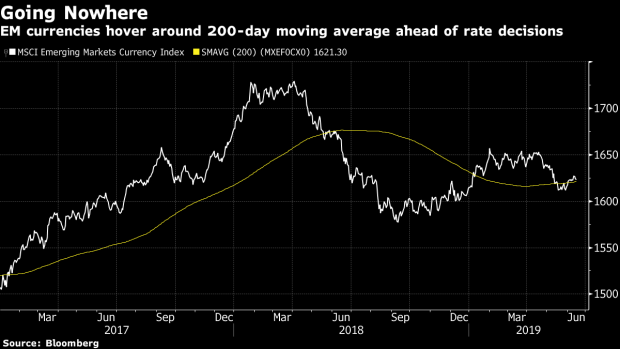 (Bloomberg) -- If emerging markets have been caught between the prospect of easier monetary policy and the deepening trade war lately, then the next few days may merely underscore that conundrum.

Policy makers in Indonesia to Brazil will probably shift to a more dovish stance at meetings this week, and the Philippine central bank may cut its key rate again after easing in May. Much of the rationale for the softer turn is the Federal Reserve’s own dovish tilt. The U.S. central bank meets June 18-19, with strategists divided on the prospect of lower rates as trade tensions cloud the global growth outlook.

“We see assets as having to price in a bit more risk for global growth and trade policy,” said Patrick Wacker, a fund manager at UOB Asset Management, whose emerging-market debt fund has outperformed the market this year with a gain of 8.7%. “With near-term risks to the downside, we do not believe right now is the best time” to add assets that are sensitive to market swings, he said.

China’s industrial output growth in May slowed to the weakest pace since 2002, highlighting the headwinds the Asian nation is facing. Rising tensions in the Persian Gulf may also weigh on emerging markets should it lead to a surge in oil prices, according to Singapore-based UOB Asset Management Ltd.

To contact the reporters on this story: Netty Ismail in Dubai at nismail3@bloomberg.net;Karl Lester M. Yap in Manila at kyap5@bloomberg.net;Sydney Maki in New York at smaki8@bloomberg.net

To contact the editors responsible for this story: Dana El Baltaji at delbaltaji@bloomberg.net, Shaji Mathew