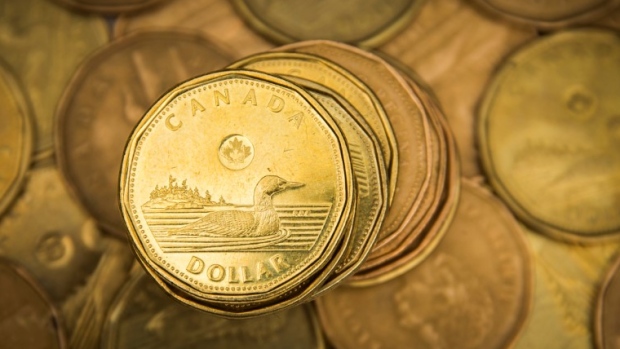 The Loonie is pictured in this illustration picture taken in Toronto January 23, 2015. , Reuters

In an interview with BNN on Friday, Tal argued a dovish Bank of Canada and uncertainty south of the border would push the Canadian dollar to 75 cents U.S. in the first quarter of 2018.

“For some reason – I don’t know why – the market is still attaching close to 30 per cent probability for a move by the Bank of Canada in December,” Tal told BNN. “I’m not sure what the market is smoking when it comes to that because it doesn’t make any sense.”

“This Bank is telling us: ‘We are not going to move in December,’ basically. So, I think that this is an easy trade and over the next few weeks you will see this probability going from 30 to zero and that’s, of course, negative for the Canadian dollar.”

The Bank of Canada took a dovish stance Wednesday when it maintained its benchmark interest rate at 1.0 per cent, following two consecutive rate increases, causing the loonie to drop to a three-month low. Tal said the central bank will stand pat again in December when it makes its next rate decision.

Tal also noted the uncertainty around NAFTA will also put pressure on the loonie.

“If you look at the Mexican peso and the Canadian dollar, it seems that they’re not paying attention,” Tal told BNN. “NAFTA is a big deal. We don’t know what will happen, and we cannot predict, but it seems like Trump wants out. Even Trudeau, the Prime Minister, is telling you that the situation is serious.”

Persistent concerns about the future of NAFTA along with Trump’s desire to push through U.S. tax cuts and the appointment of new chair of the U.S. Federal reserve do not bode well for the Canadian dollar, said Tal.

“I’m looking at all kinds of factors and they’re all pointing in one direction. And, that’s basically: This loonie’s going down.”