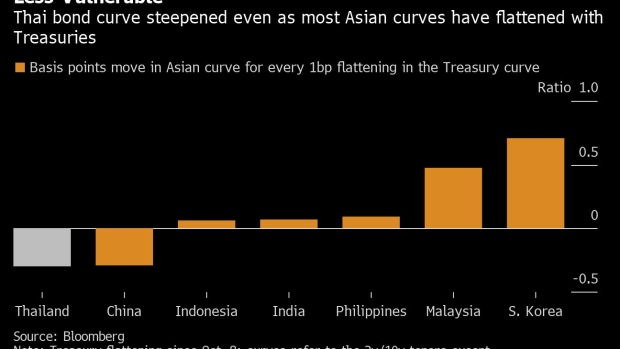 Customers shop at the Sampheng Market in the Chinatown area of Bangkok, Thailand, on Sunday, Aug. 29, 2021. Bangkok's Chinatown, founded at the same time as the Thai capital itself more than 200 years ago, is one of the largest anywhere and an important focal point for culture and trade. It is also rapidly changing. Photographer: Nicolas Axelrod/Bloomberg , Bloomberg

(Bloomberg) -- Thailand’s central bank is expected to be the last in Southeast Asia to lift rates, leading to one of the steepest yield curves in the region as other nations brace for the first Federal Reserve hike since 2018.

Shorter-duration Thai bonds remain buoyed by a dovish Bank of Thailand policy that contrasts with an increasingly hawkish Fed, which on Wednesday signaled a March rate liftoff. Fed Chair Jerome Powell also did not rule out moving at every meeting to tackle the highest inflation in a generation.

Confronted by a subdued tourism recovery, tighter social distancing restrictions and weak domestic investor demand at a time of high bond supply, the Thai central bank is likely to allow policy rates to remain at record lows for longer, anchoring front-end yields, HSBC analysts led by Andre de Silva wrote in a recent note. The bank sees Thailand being the last among its peers to hike rates.

Global funds have poured $2.7 billion into Thai debt in January so far, on pace for the highest monthly inflow since June 2016, and mostly into short-dated bonds.

For every 1 basis point flattening in the U.S. Treasury curve, the Thai sovereign bond curve has steepened by 0.3 basis point, according to a Bloomberg analysis, indicating that it’s the least susceptible in Asia to rising U.S. Treasury yields.

“The Bank of Thailand’s main concern will be the health of the overall economy, with inflation and Fed rate hikes unlikely to have a strong influence on monetary policy,” said Poon Panichpibool, a strategist at Krung Thai Bank Pcl in Bangkok.

An increase in the Federal Reserve rate adds pressure on most Asian policy makers to respond to maintain the allure of emerging-market assets. Indonesia, Malaysia and the Philippines are expected to raise rates this year, according to a median of economists surveyed by Bloomberg. Singapore unexpectedly tightened monetary policy earlier this week.

An Indonesian central bank official on Wednesday gave further hawkish signals saying it would be preemptive with its monetary policy to temper volatility in the markets. The nation was the first in Southeast Asia to pivot toward a hawkish bent by announcing a gradual increase in banks’ reserve requirement ratio last week.

Krung Thai’s Poon expects the Thai yield curve to steepen further in the first three quarters of this year. Shorter-end yields will be weighed down by dovish rate expectations, while longer-dated yields will be propped up by bond supply pressure. He sees it possibly starting to flatten in the fourth quarter, ahead of a potential rate hike in the second half of 2023.

The 60-day positive correlation between 10-year Thai and U.S. bonds stands at close to 0.25, compared with the same gauge for 2-year notes which has a negative correlation of 0.15 -- suggesting that long-end Thai rates are more susceptible to rising Treasury yields.

In the previous hike cycle in 2018, 2-year Thai yields only began significantly widening above the policy rate six months before the eventual hike in December the same year, with the gap rising to around 50 basis points.