Exxon Mobil Corp, Pfizer Inc. and Raytheon Technologies Corp. were kicked out of the Dow Jones Industrial Average as part of the stock benchmark’s biggest reshuffling in seven years, actions that will boost the influence of technology companies that have dominated the 2020 stock market.

Salesforce.com, Amgen Inc. and Honeywell International will enter the 124-year old equity gauge a week from today, its overseers said. The moves were prompted when Apple Inc.’s stock split effectively reduced the sway of computer and software stocks in the price-weighted average.

While any change to the Dow is notable, the ejection of Exxon Mobil -- the world’s biggest company as recently as 2011 -- marks a particularly stunning fall from grace, reflecting the decline of commodity companies in the American economy. Worth US$525 billion in 2007 and more than US$450 billion as recently 2014, the stock had fallen in four of six years before 2020 and is down another 40 per cent since January.

“Those changes are a sign of the times - out with energy and in with cloud,” said Chris Zaccarelli, chief investment officer for Independent Advisor Alliance.

The latest reshuffling is more testament to the ascent of technology companies, a trend amplified by this year’s COVID-19 lockdowns. While the Dow average is still 4.2 per cent off its February record, the tech-heavy Nasdaq 100 is almost 20 per cent above the pre-pandemic all-time high. 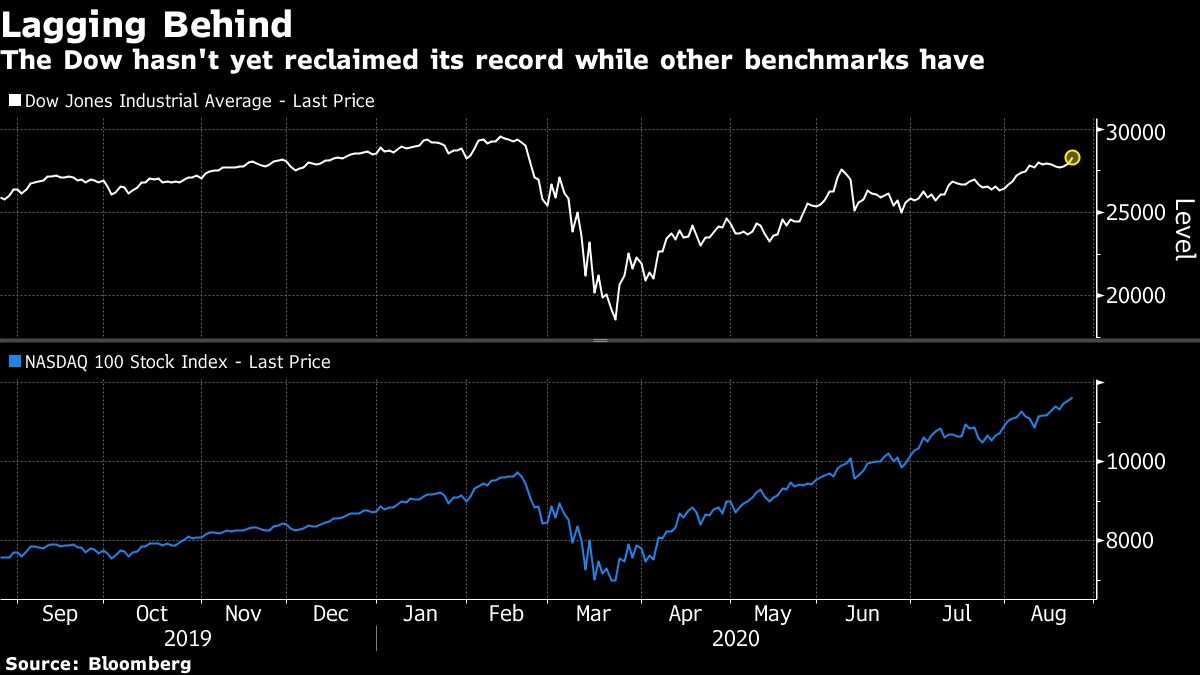 Founded in 1999, Salesforce was one of the best-performing stocks of the bull market following the global financial crisis, rising 27-fold since March 2009. Amgen is among the world’s biggest biotechnology companies with a market value of about US$137 billion, though it’s replacing a company -- Pfizer Inc. -- that is about US$90 billion larger.

The blue-chip index weights its constituents by price rather than market value, making it different from the broader S&P 500. A committee chooses members in an effort to maintain “adequate” sector representation and favors a company that “has an excellent reputation, demonstrates sustained growth and is of interest to a large number of investors,” according to its website. Other major indexes add and subtract members on a rules-based process.

While its influence has faded over the years as passive managers linked to benchmarks based on market value, the Dow remains an exclusive club and still serves as one of the highest profile showcase of American industrial heft. Roughly US$31.5 billion of assets are benchmarked to the Dow, with US$28.2 billion of passively managed funds linked. (The figures are US$11.2 trillion and US$4.6 trillion for the S&P 500.)