The U.S. Fed is no longer your friend: Macro strategist

Stocks notched their biggest advance since October as dip buyers scooped up some of the hardest-hit shares during a two-day selloff. Treasuries retreated.

Companies that stand to benefit the most from economic growth drove gains in the S&P 500, with small caps and travel stocks surging. The Dow Jones Industrial Average climbed almost 2 per cent, led by aerospace giant Boeing Co. Technology shares underperformed. The U.S. is inching ahead on efforts to boot Chinese firms off stock exchanges for not complying with Washington’s disclosure requirements.

Volatility has gripped financial markets this week, stirred by Federal Reserve Chair Jerome Powell’s hawkish tone and the spread of the omicron coronavirus strain. The turmoil may offer investors a chance to position for a trend reversal in reopening and commodity trades, according to JPMorgan Chase & Co. strategists. While it’s likely that the variant is more transmissible, early reports suggest it may also be less deadly, they added.

“What we’re seeing is the propensity to buy the dip,” said Aoifinn Devitt, chief investment officer at Moneta Group. “And why are we buying the dip? Because there’s just so much money sitting on the sidelines. Even though these short bouts of volatility are surprising and certainly have sent a chill through markets, we still have a significant bank of equity returns to enjoy year to date.” 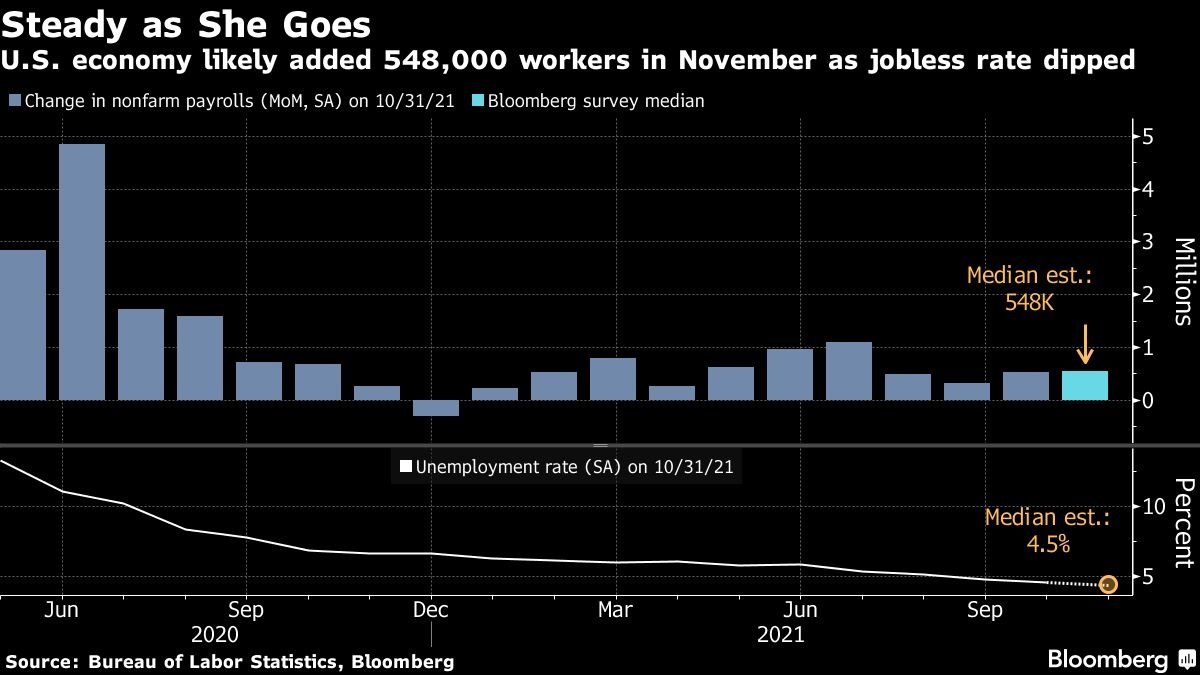 Applications for U.S. state unemployment benefits rose by less than forecast last week, suggesting additional progress in the job market. The figures come a day before the monthly employment report, which is projected to show payrolls increased by 548,000 in November.

Fed Governor Randal Quarles, Atlanta Fed President Raphael Bostic and his San Francisco counterpart Mary Daly laid out the case for speeding up the removal of policy support amid higher inflation -- adding their voices to the message delivered by Powell this week. Treasury Secretary Janet Yellen said she understands the “reasoning” behind the central bank’s plans to reduce asset purchases.

Oil prices are primed for gains as Thursday’s decision by OPEC+ to proceed with planned production increases won’t derail an ongoing structural bull market, according to analysts at Goldman Sachs Group Inc. The investment bank sees “very clear upside risks” to its forecast for Brent to average US$85 a barrel in 2023.