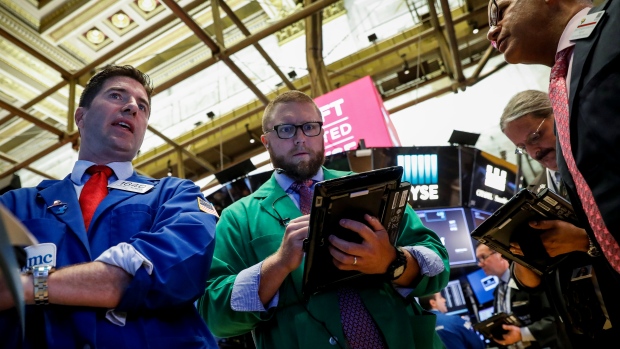 Sharp gains in the United States drove stocks higher despite a rout in emerging markets, while crude oil prices were volatile as OPEC met in Vienna to discuss an extension to its supply-cap deal.

Chances of passage of a Senate tax overhaul bill rose with the endorsement of Senator John McCain. U.S. stocks, which opened higher as Wednesday's selloff in technology and other high-flying stocks reversed, took a further leg higher after McCain's endorsement.

The tax bill proposal, expected to reduce corporate taxes, is seen by most analysts as a boon to the stock market.

"The market is pushing higher as the tax reform gets closer to becoming a reality," said Mark Heppenstall, chief investment officer at Penn Mutual Asset Management in Horsham, Pennsylvania.

He said stocks are "beginning to price in a higher certainty of tax reform happening and that is the big driver today."

The dollar slipped against the euro and other major currencies except the yen, despite U.S. data that showed a rise in inflation and a decline in initial jobless claims. The data reinforced already strong bets that the Federal Reserve will raise rates next month and several more times in 2018.

TSX ON THE RISE

The energy group climbed 2.2 per cent, with crude prices boosted by a deal among OPEC members and other oil producers to extend output cuts until the end of 2018.

Pipeline operator Enbridge Inc (ENB.TO) jumped 6.3 per cent to $48.65 after saying it plans to sell $3 billion of assets.

Toronto-Dominion Bank (TD.TO), the country's second-biggest bank, lost 2.4 percent to C$73.24 as lower investment banking revenue contributed to a fourth-quarter earnings miss, while No. 5 lender Canadian Imperial Bank of Commerce (CM.TO) rose 2.9 per cent to $118.14 after its earnings exceeded expectations.

Lundin Mining Corp (LUN.TO) slumped 16.1 per cent to $7.52 in heavy volume after the diversified base metals miner lowered production guidance for 2018 at a flagship copper mine and several analysts cut their recommendations and target prices on the stock.

The materials group, which includes precious and base metals miners and fertilizer companies, lost 0.3 per cent.