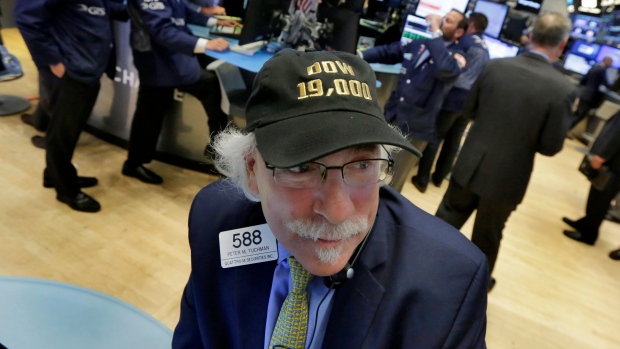 U.S. stocks extended their post-U.S. election rise on Tuesday with moderate gains that pushed the Dow above 19,000 and the three major indexes to record closing levels for a second straight day.

The small-cap Russell 2000 index hit an intraday high for the fourth day in a row, before all four indexes eased off their highs in late morning trading.

President-elect Donald Trump's pro-growth policies, including promises of tax cuts, higher infrastructure spending and simpler regulations in the banking and healthcare industries, had sparked a rally since his election win.

"I call the next phase here the blowout phase because I do not think market valuations are bargain-based. I could see some profit taking in the next couple of days," said Sander Read, chief executive of Lyons Wealth Management in Winterpark, Florida.

"If we see the indexes close above the 19,000 and 2,200 levels, that would say we are going to move higher. I don't think we're going to see that in the next day or two. I think there might be selling around that level," said Brad McMillan, chief investment officer at Commonwealth Financial.

Canada's benchmark stock index rose to a fresh 17-month high on Tuesday as base metal mining and financial shares rose, offsetting some profit-taking in energy shares ahead of a meeting next week of major oil producers.

The consumer discretionary sector's 0.85 per cent increase on Tuesday and gave the broader S&P 500 index its biggest boost.

Among the sector's top drivers was Dollar Tree, which surged 9.9 per cent to $90.07 after the dollar-store chain reported a better-then-expected quarterly profit.

The healthcare sector was the only laggard among the 11 major sectors. It fell 1.45 per cent, weighed down by Medtronic and Johnson and Johnson.

Medtronic tumbled 7.5 per cent to US$74.5 after the medical device maker reported quarterly revenue that missed expectations and cut its full-year adjusted earnings forecast.