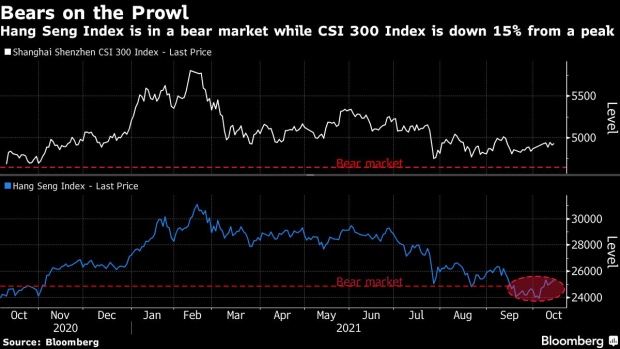 (Bloomberg) -- Like the demise of Enron Corp. and the collapse of Lehman Brothers, the debacle at China Evergrande Group was inevitable to some only in retrospect.

As recently as June 8, analysts at JPMorgan Chase upgraded their rating on the shares of the world’s most indebted developer to overweight from neutral. “Sales of Evergrande should improve, which should remove concerns among investors,” they wrote.

While this might be among some of the most embarrassing calls, the JPMorgan Chase team was far from alone. Investors all over the world kept betting on China even as markets in Shanghai, Shenzhen and Hong Kong lagged the developed world. JPMorgan Chase declined to comment on its analysts’ Evergrande call.

Some 86% of the more than 5,600 recommendations in China’s benchmark CSI 300 Index were a buy equivalent at the start of the year -- the most bullish outlook in a decade. The result was disappointment. Chinese stocks, which had recovered from the virus in 2020 before the rest of the world, this year missed the global rally that pushed European and U.S. equities to record highs, and they lag even after the recent pullback in developed markets.

Hong Kong’s Hang Seng Index is among the world’s worst performing primary equity gauges tracked by Bloomberg this year, with some of its crown jewels such as Alibaba Group Holding Limited down 30% in 2021.

The losses haven’t dented the outward optimism: About 87% of analyst recommendations are still a buy. By at least one measure -- flows into China ETFs -- investors are listening. Almost $5 billion was channeled into such products in the first half of 2021, up from $3.4 billion the previous half and withdrawals in the first half of 2020, according to Bloomberg data.

Beyond analysts and fund managers, virtually the entire finance industry, including BlackRock Inc. and Goldman Sachs Group Inc., has kept its eye on the elusive prize of minting money in China amid Beijing’s crackdown on tech giants, an unpredictable pivot by the government against whole industries and a stuttering recovery from Covid.

The picture highlights the challenges -- and hopes -- of pouring money into such an unpredictable market, which has been marked by opaque policy making and government efforts to take on corporate titans.

There’s no shortage of explanations why so many got so much so wrong. Following are some of them.

Alastair Reynolds from Martin Currie Investment Management Limited, part of Franklin Templeton, said they were blindsided by the breadth of the crackdown by policy makers.

The government has been steadily tightening restrictions in the real estate market over the last few years to rein in financial risks. It has increased scrutiny on everything from financing of developers to mortgage approvals and revived the idea of a national property tax. It last year also drafted what are known as “three red lines” -- debt metrics that developers will have to meet if they want to borrow more.

While President Xi Jinping’s push to rebalance the country’s economy may make sense, investors were surprised at the economic damage “he’s willing to tolerate to get” there, says Dawn Fitzpatrick, chief investment officer at Soros Fund Management, which is shunning assets in the world’s most populous nation.

Avoiding China, though, isn’t an option for most. So many are tinkering with their approach, hoping they can avoid the damage wrought by an opaque policy making machinery. Singapore’s GIC Pte. favors sectors that are supported by Beijing and acknowledging the prospect of lower returns in the country. The city-state’s other state-owned investor, Temasek Holdings Pte, is holding off on further investments in China’s internet platforms as it seeks more certainty on the fallout from regulatory crackdown.

Qu Hongbin, Co-Head of Asian Economics Research at HSBC also thinks that there may be fewer surprises going forward. “Regulatory tightening in property, internet and other sectors should continue, yet it will likely be implemented in a gradual and more transparent manner to mitigate the unintended impact on growth,” he said.

For Fidelity International, China’s authorities have decided to lead the country into a direction of a less dramatic but more sustainable growth model, with a focus on equitable access on health care, education and housing. Investors, who were taken aback by the level of monetary and fiscal tightening and the intensity of this year’s regulatory intervention, must position themselves for this new national economic strategy.

Of course, predictions are hard, especially about the future, or so the saying goes, and even more so when it comes to China.

“In advanced economies you have to pass laws, you have to discuss them, muster a majority,” so analysts have ample visibility and time to prepare for what’s coming, says Barraud. “Chinese officials have more room to do what they want,” often within the space of a few days, he says. “Shocks can become more violent.”