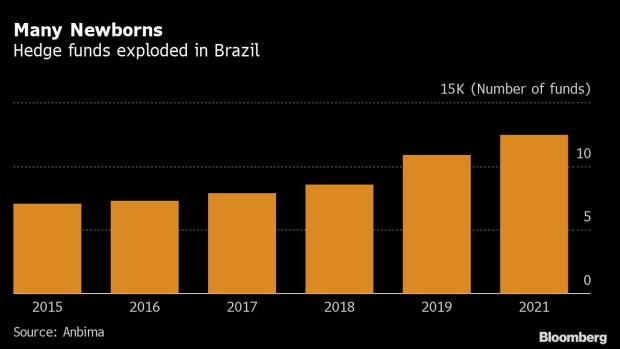 (Bloomberg) -- Marcio Appel made a splash in the high-flying world of hedge funds five years ago and quickly became the poster child for a revolution in Brazil’s capital markets.

His Adam Macro drew more money than any other new hedge fund globally that year. Overnight, Appel became a sought-after guru, holding seminars with as many as 9,000 eager investors, many of them middle-class Brazilians dipping a toe in the stock market for the first time. Traders at Goldman Sachs Group Inc., JPMorgan Chase & Co. and Banco Santander SA followed his lead, starting their own funds with hopes of at least doubling their salaries. In the nation’s financial circles, the mass shift became known as the “Adam phenomenon.”

Half-a-decade later, after a 70% surge in the number of Brazilian hedge funds, the glory days are fading for the $280 billion industry. Assets under management in Adam Macro’s flagship fund have plunged 90% from their peak amid uninspiring returns. Industry wide, investors are yanking money out at the fastest pace since 2017. Smaller firms have combined in an effort to stay alive, and more consolidation may be on the way.

The biggest change from the go-go days is that Brazil’s benchmark interest rate has soared to 7.75% with traders pricing in a peak of 12% by 2023, meaning investors can score fat returns by just buying lower-risk government bonds. Meanwhile, forecasts for lackluster economic growth and political volatility as President Jair Bolsonaro seeks re-election next year have sent investors seeking safer options. Add in the high fees that hedge funds charge, not to mention the middling performance for most of them, and it’s become increasingly difficult to justify that type of investment.

“Investors are getting scared and jumping out of high-risk funds,” said Claudia Emiko Yoshinaga, a finance professor at Fundacao Getulio Vargas, a university and research institute in Sao Paulo. “Brazilian investors have anticipated next year’s turbulence and gone back to fixed income, which is in their DNA.”

The sea change is upending Brazil’s financial industry. Investors’ shift to fixed-income securities is bound to dent revenue and could make it harder for hedge-fund operators to retain all that talent lured away from banks over the past years. While a hedge fund usually charges a 2% fee on assets under management plus a 20% performance fee, credit funds charge about 0.8% on average, often without any kind of performance fee.

For Adam Capital, the shakeout has meant its flagship fund now only holds 1.22 billion reais ($216 million) of assets, down from 12.7 billion reais at its 2018 peak. Over the past year, it posted more outflows than a group of 240 similar hedge funds in Brazil, data compiled by Bloomberg show.

Adam Capital may be the most striking case, but it isn’t alone in seeing money flow out its doors. Funds like JGP Strategy and Kinea Chronos have also seen holdings drop by more than 3 billion reais each. They share a common narrative: All had a growth spurt in recent years followed by lackluster returns.

“While the process of financial education has evolved a lot in Brazil, at the end of the day the performance is still what counts the most,” said Nelson Muscari, who covers funds at local brokerage Guide Investimentos.

Performance for the Adam Macro fund started off strong, beating most peers in its first years, but returns have since fizzled. From its 2016 inception to today, the fund is up 58% after fees -- while returns for the benchmark risk-free deposit rate totaled 44% in the same period and a basket of peers, the IHFA index, is up 61%.

When the Adam Macro fund debuted in early 2016, Brazil was going through the worst recession in its history and then-President Dilma Rousseff was in the middle of an impeachment trial. Interest rates were at 14.25%, among the world’s highest.

Amid the turmoil, a once-in-a-generation shift was taking place in the local investment industry.

For decades, hedge funds in Brazil were only available to the ultra-rich, sold through private bankers and wealth managers, with high minimum investments. Then came firms like XP Inc., a group of retail-focused brokerages inspired by Charles Schwab Corp. that started offering those products to middle-class investors. They called themselves “financial supermarkets” and Adam Capital’s funds were among the first to catch on as interest rates started coming down at the end of 2016.

It’s not just timing that benefited the new firm, but also Appel’s past credentials.

After leading the asset-management division at Banco Santander’s Brazilian unit from 2001 to 2008, he moved to the same role at Banco Safra SA. That’s where he built a reputation among some of the nation’s wealthiest investors thanks to the performance of his Galileo fund. During his almost five-year stint at Safra, which ended in 2015, it soared almost 200%.

The next year, he created Adam Capital alongside former colleague Andre Salgado. The firm rented an office in Rio de Janeiro’s upscale Leblon neighborhood. Salgado, 48, handles client relationships, while 49-year-old Appel oversees investment decisions at the fund. In addition to the flagship Adam Macro, the firm also manages another two hedge funds and a pension fund.

Though Adam started off strong, the fund failed to keep up with the long-term track record Appel had set at Galileo, said Luiz Felippo, a partner and fund analyst at Sao Paulo-based independent research firm Nord Research.

Officials at Adam Capital declined to comment for this story. But in a podcast in April 2020, Appel acknowledged the challenges.

“The truth is that only a few businesses are as good as the business of having your own asset manager,” Appel said then. “The tough part is delivering returns over a long period of time.”

The big question now is how many of the new hedge funds will last. Around 60% of those that existed in Brazil in 2010 aren’t around anymore in 2021, according to Nord Research.

Among those that managed to survive are firms that have been consistently able to make money throughout the many ups and downs of the Brazilian economy. One of the local industry’s pioneers, Luis Stuhlberger, has been managing his Verde hedge fund since 1997. It’s returned 18,376% since inception and remains one of the most coveted products in Brazil’s investment industry.

In the near term, Adam’s fund has improved its performance. It posted its best month in three years in October, outperforming some of its top rivals. The fund has positions that stand to benefit from the strength of the U.S. economy, Adam said in its latest note to clients.

After the boom of the past five years, Brazil’s hedge-fund industry is going through a shakeup just as it’s becoming a lot harder to outperform local bonds, according to Nord’s Felippo.

“Many of these new firms surfed the drop in Brazilian rates, but now they face a worse environment,” Felippo said. “The cash is drying up.”