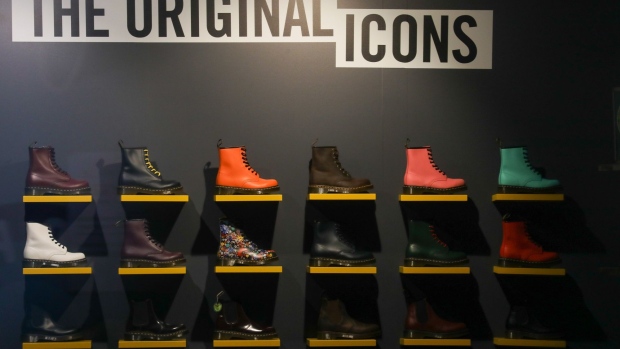 Shoes on display inside the Dr. Martens store on Carnaby Street in London, U.K., on Wednesday, Jan. 20, 2021. Bootmaker Dr. Martens, known for its air-cushioned soles, is considering an equity value of 4 billion pounds ($5.4 billion) or more in an initial public offering. , Bloomberg

Dr. Martens owner Permira Holdings and other shareholders are looking to raise as much as 1.3 billion pounds (US$1.8 billion) in an initial public offering of the shoemaker on the London Stock Exchange, betting on the enduring popularity of its cult leather boots.

The company doesn’t plan to raise any money itself in the IPO. Private equity firm Permira and other investors are selling as many as 350 million shares at 330 pence to 370 pence apiece, according to terms seen Monday by Bloomberg News.

Soon after opening the order book, the IPO had enough investor demand to cover all the shares on offer throughout the price range, terms showed.

The sale of the 35 per cent stake at that price range values Dr. Martens at 3.3 billion pounds to 3.7 billion pounds, which is more than 10 times the 300 million pounds Permira paid for the bootmaker in 2014. The Griggs family, directors of the company, employees and former employees also own stock, according to the terms.

Shareholders can sell another 53 million shares in the IPO if there’s enough demand, which would bring the size of the offering up to 1.49 billion pounds, the terms show.

Dr. Martens will take investor orders for the share sale through Feb. 1, with the new stock to start trading in London on Feb. 2. The time line is subject to acceleration, according to the terms.

Permira has increased the brand’s global presence, opening new stores and expanding its e-commerce offering. Dr. Martens chunky boot has been one of the most sought-after shoe styles of the last couple of years, boosting sales.

Yet, it’s not always been smooth sailing. The company, which was founded in 1947, came close to bankruptcy in 2003 when it cuts jobs in Britain and moved manufacturing to China.

The IPO comes amid a resurgence in activity across Europe. Strong equity markets are making going public an attractive exit option once again, with a number of big name investors across Europe including SoftBank Group Corp. listing portfolio companies.

Permira began working with advisers in mid-2019 on ways to offload Dr. Martens and attracted interest from suitors including rival private equity firm Carlyle Group, Bloomberg News reported at the time. Those discussions didn’t result in an agreement and Permira is said to have revived plans to exit its investment last year.