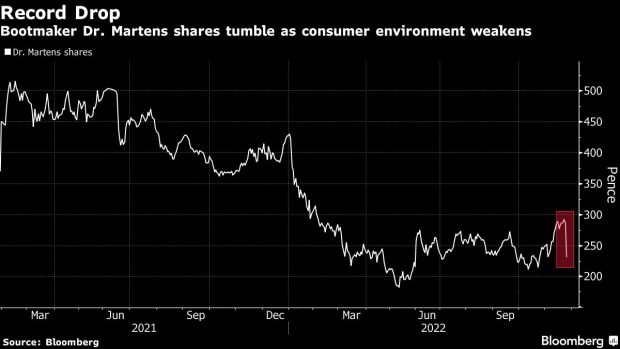 Shoes on display inside the Dr. Martens store on Carnaby Street in London, U.K., on Wednesday, Jan. 20, 2021. Bootmaker Dr. Martens, known for its air-cushioned soles, is considering an equity value of 4 billion pounds ($5.4 billion) or more in an initial public offering. , Bloomberg

(Bloomberg) -- Dr. Martens Plc shares plunged the most on record after the iconic bootmaker reported sales and earnings that missed analyst expectations, in a sign that middle-class consumers are also feeling the pinch of higher living costs.

Revenue for the six-months to Sept. 30 was £418.6 million ($505.9 million), while earnings before interest, taxes, depreciation, and amortization was £88.8 million, the London-based company said in a filing Thursday. Both numbers missed Bloomberg Consensus estimates.

“The company is not immune to macro softness and the impact accelerating inflation has on the spending power of the middle class,” Morgan Stanley analysts including Edouard Aubin wrote in a note. The shares dropped as much as 21% on Thursday morning, the most intraday since Dr. Martens went public in January 2021.

UK consumers are reassessing their discretionary spending, with the economy in recession and inflation running at four-decade highs. The OECD this week predicted the UK will underperform other major economies for the next two years.

Dr. Martens said it’s keeping its revenue forecast for the full year, while also acknowledging the weakening consumer environment in the first half. It now sees the full year Ebitda margin to be 100 to 250 basis points lower than last year.

“Overall, we’re still seeing good growth from the business,” Kenny Wilson, chief executive officer of Dr. Martens, said in a phone interview. “In Europe, we’re still seeing very strong demand for the brand, a little bit of softening in the second quarter in the US. But we’re seeing that come back now as the weather is getting colder.”