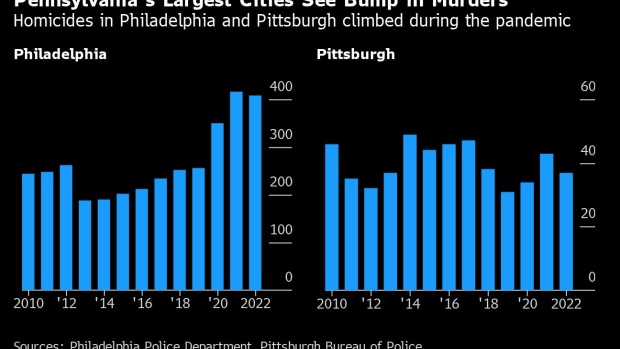 Even though homicides are actually down in Philadelphia and Pittsburgh from last year, the celebrity TV doctor and his allies have blanketed the state with ads showing gritty images of armed robbers, drive-by shootings and other violent acts, part of a $38.6 million blitz since Aug. 1 that’s outspending Democrats.

The barrage is working. The nonpartisan Cook Political Report changed its rating of the race to “toss-up” from “lean Democrat” on Tuesday. With five weeks until Election Day, Fetterman leads Oz by 6.6 points in the FiveThirtyEight average of polls, nearly half of what it was in mid-August.

Strategists long expected a close contest to replace retiring Republican Senator Pat Toomey in a swing state that voted for Donald Trump in 2016 and  Joe Biden in 2020. But Fetterman sprinted to an early lead in polls, nourishing Democrat optimism that the Pennsylvania seat was their best pick-up opportunity in an election that could decide party control of the upper chamber. Fetterman, who suffered a stroke in May, deployed an unconventional and effective social media campaign mocking Oz that’s just now starting to show signs of weakening.

Fetterman himself acknowledges that the attack ads displaying ominous pictures of the 6-foot-8, tattooed lieutenant governor in a hoodie have “actually tightened the race.”

“The other side realizes they can’t make anybody like them, so what they are trying to do is lie and force people to not like me,” Fetterman told MSNBC Tuesday.

It’s helped shore up Oz’s support, especially among skeptical Republicans after he narrowly won the GOP primary in May with Trump's endorsement after his opponents spent millions of dollars attacking him as a “Hollywood liberal,” said Berwood Yost, director of the Franklin & Marshall College Poll.

“The advertising that he and his surrogates have put out there has really helped to make it a choice,” Yost said.

The college’s poll, released last week, showed Fetterman’s lead over Oz dwindling since August to within the margin of error. And in a survey released Wednesday by Monmouth University Polling Institute, 43% of those polled supported Oz, up from 39% three weeks ago. Forty eight percent said they would likely vote for Fetterman.

Republicans nationwide are sharpening their attacks against Democrats on the issue of crime in an attempt to blunt anger over the June Supreme Court decision ending the national right to abortion. The ruling galvanized Democrats in a midterm election cycle earlier dominated by inflation and Biden’s declining popularity.

So far, the crime issue has proven to be an effective cudgel.

Democrats have struggled to mount an effective defense, and Republican candidates in other battleground states such as Wisconsin, Ohio and Nevada have opened up narrow leads in polls, after previously trailing.

Homicides in both Philadelphia and Pittsburgh are high compared with pre-pandemic years, but actually down so far this year compared with last year, according to police data. Still, increases in crime after years of subdued rates reinforce perceptions of lawlessness.

Crime also dovetails with Republicans’ messaging that Democrats have presided over rampant inflation that has weakened the economy and fueled desperation.

Consumer prices in Philadelphia and Harrisburg, the state’s capital, jumped 7.7% in the four months ended in August from the previous year, while in Pittsburgh, they rose about 7.5%, according to Moody’s Analytics. That’s lower than the national increase of 8.6% over the same period.

Pennsylvania’s economy is recovering more slowly from the pandemic than other states, with about 70,000 fewer people employed compared with early 2020. Although inflation isn’t as bad as the national average, it’s still historically high for the commonwealth, where the median income is slightly lower than that for the US.

In campaign ads and speeches, Fetterman’s touted his work as the former mayor of the tiny Pittsburgh suburb of Braddock, where he showed up at crime scenes and where he oversaw a five-year stretch without a gun death.

He built his polling lead over Oz by running ads seven weeks earlier than the Republican, highlighting his Pennsylvania roots and outspending Oz in July and August.

Finally striking back after Fetterman’s relentless jabs on his wealth, such as his penchant for crudité, Oz has seized on Fetterman’s tenure as lieutenant governor. As chair of the state pardon board, Fetterman advocated for shortened sentences for non-violent offenders. Oz even erected a billboard in Fetterman’s stomping grounds of Braddock calling him “soft on crime.”

Fetterman’s lead has shrunk in part because “voters in Pennsylvania are being so hurt by the lawlessness around us,” Oz said at a press conference in Pittsburgh last week. During a forum on crime in Duquesne near Braddock earlier in the day, Oz talked about how patients would tell him their illnesses were driven by stress caused by environmental factors out of their control.

“There’s that belief in lawlessness around you that makes you uncomfortable having your family just go out and do what kids normally do, what spouses normally do for each other, instead they just sort of hunker down,” Oz said.

Fetterman has “let criminals run rampant,” said Brian Durbin, a production manager for a manufacturing company who hosted a fundraiser for Oz on Sept. 29 at All Saints Brewing Co. in Greensburg with about 100 people.

(Everytown for Gun Safety is among the outside groups airing crime-related ads in Pennsylvania, with $2.1 million in ads that started appearing Wednesday -- including one attacking Oz on gun control. The group is backed by Michael Bloomberg, founder and majority owner of Bloomberg LP, parent company of Bloomberg News.)

Although Fetterman sat out events after suffering the stroke, he saw his support grow after viral stunts highlighting Oz’s wealth and New Jersey roots, including videos from Nicole “Snooki” Polizzi, star of MTV’s “Jersey Shore.”

Oz has mocked Fetterman’s trademark hoodie as a “costume” and campaigned alongside Trump during a Sept. 3 rally when the former president made an unfounded accusation that Fetterman was a hard-core drug user. Fetterman called Oz a “puppy killer” after a report this week by the web publication Jezebel alleged that Oz’s medical experiments resulted in the deaths of at least 329 dogs.

Fetterman also is emphasizing abortion rights to appeal to women. Oz has struggled to explain his position, saying he’s pro-life with exceptions for rape, incest and the life of a mother and that states should decide the issue. But he won’t say directly whether he’d vote for a federal law such as South Carolina Senator Lindsey Graham’s proposed for a nationwide ban on abortions after 15 weeks of pregnancy.

Pam Turner of Greensburg, 70, a retired teacher’s aide, is a Republican but said she’s still undecided about whether to vote for Oz or Fetterman because of the issue of abortion.

“I just really think a woman should have the right,” Turner said after buying fresh produce at a roadside farmer’s market outside Greensburg.

Nancy Mundy, 61, a Democrat and conference planner from Pittsburgh, attended Fetterman’s rally in the rain and said Oz and Republicans are trying to counter the impact of the abortion issue by “scaring white Republican women about this crime.” Crime won’t supersede abortion after the Supreme Court ruling, said Mundy, who worries about her two daughters and three granddaughters.

In Pennsylvania, Oz needs to energize voters in the more Republican-friendly western part of the state to counter Democratic votes in its two biggest cities and suburbs.

“Fetterman, he likes to support Joe Biden, and I don’t like Joe Biden,” said Dheaven Kelley, 27, a Republican and Washington County government employee who complained about high gasoline prices. “He has pretty much destroyed America, the economy.”

But longtime Pennsylvania Democrats are confident voters will look past the dire ads on crime.

“It’s always been a traditional Republican go-to,” said Leroy Lundgren of Pittsburgh, 71, a Democrat and retired US Army worker. “If anything, Fetterman has proven that he has done something about crime.”