Now they’re gearing up for the real thing, starting with Major League Baseball’s opening day Thursday, and investors look like the real winners. Despite the shutdown, not one analyst has downgraded their recommendation for DraftKings, even with the shares almost doubling from their April debut on the public markets. Flutter has risen similarly from March lows.

“Since the PGA has come back, every single week seems to be the best we’ve ever done,” said Johnny Avello, DraftKings’ director of bookmaking. Average bets have been increasing and the company is eager to pivot back to the major leagues after offering wagers on darts and esports. On July 21, FanDuel deposited a US$10 credit in every customer’s account to “celebrate the return of sports.” The company has “never planned for more generosity” in terms of promotions for the return of major U.S. sports, said Chief Marketing Officer Mike Raffensperger.

“In terms of driving paid play, it’s been an exercise in some creativity to be honest,” Raffensperger said by phone. That creativity spurred free-to-play games around political topics, food, and social media to keep users entertained. Daily fantasy sports competitions tied to the PGA’s 2020 RBC Heritage tournament saw a 234% increase in entries compared to the year before, while the 2020 Charles Schwab Challenge saw a 10-fold increase in bets over 2019.

The return of three major U.S. leagues -- baseball, basketball and hockey -- should build on the momentum from golf, Nascar and UFC. However, the coronavirus still threatens key sports like college football and the National Football League. Football makes up about a third of DraftKings’ action, Avello said in a phone interview.

The Pac-12 and Big Ten have canceled nonconference games with roughly six weeks before the season’s typical start. For the NFL, the league and the players association are inching toward opening training camps at month’s end amid a backlash from players on social media over safety protocols. Preseason games have reportedly been canceled.

“It’s been a strange year, and if college football isn’t around it just makes it stranger,” Avello said.

The enthusiasm for the shares may be more about long-term prospects for wider legalization of sports bets, according to Morgan Stanley analyst Thomas Allen. “One season of not having a major sports league play is not a big financial hit,” said Allen, one of 10 analysts recommending DraftKings shares. Two others advise investors to hold the stock.Allen is focused on growth in the overall betting market. State tax shortfalls in the wake of the pandemic will lead to more legalization, he predicted. 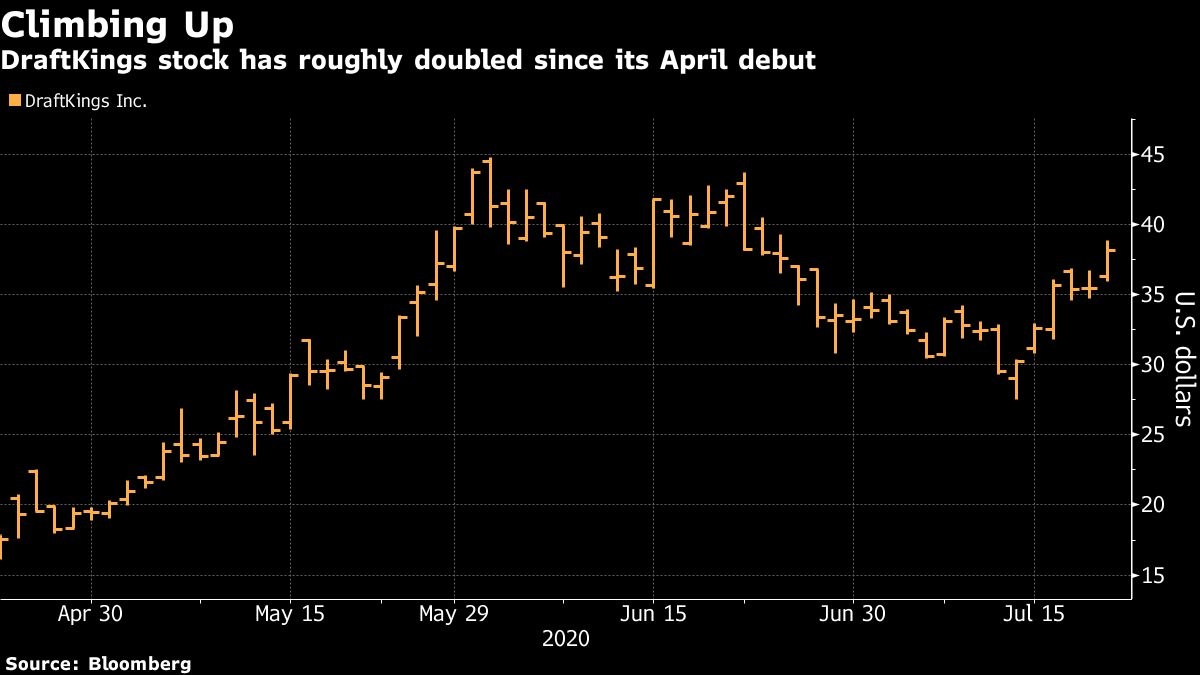 Sports wagering revenue in the Garden State rose in June to US$12.6 million, a 30 per cent jump from the year before, while internet gaming surged more than 120 per cent to almost US$85 million, the New Jersey Division of Gaming Enforcement reported. The results showcased DraftKings as a clear beneficiary, Allen wrote in a July 14 note.

“I honestly can’t wait for baseball and football to return so I can go back to making bets on games and different prop bets,” Alex Rosenthal, a 27-year-old who has been gambling through DraftKings since 2018, said in an interview. “I’m moving to Manhattan this week, so I’ll have to take the train or ferry back to Hoboken to make my bets but it’ll be worth it.”