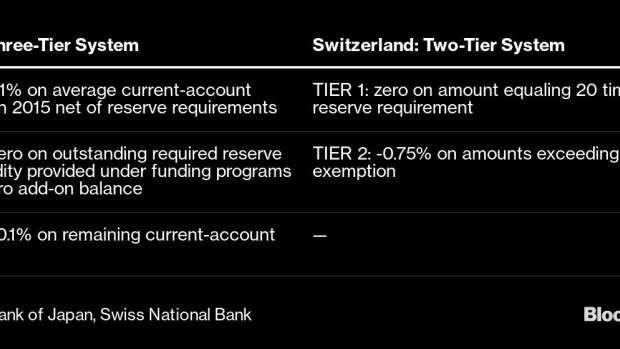 (Bloomberg) -- The European Central Bank offered lenders partial relief from its negative interest rates -- which were cut again on Thursday -- in an acknowledgment that the policy risks undermining the banking system.

The Governing Council is introducing a two-tier system for reserves in which part of banks’ holdings of excess liquidity will be exempt from the ECB’s deposit charges. The ECB also improved the conditions for making long-term loans to banks, known as TLTROs, by lowering the interest rate on those loans.

The ECB is betting on that further rate cuts will help revive inflation and growth as the threats from U.S. trade protectionism and Brexit hit confidence. Lenders have long complained that the policy, which results in them paying to park their cash with the central bank, squeezes profitability. That could cause them to pare back lending which in turn would drag down growth, creating another headache for the ECB.

Exempting some of the deposits from a charge, a process known as tiering, will relieve some of the pressure on profits. At a conference last week, top executives from Deutsche Bank AG, ABN Amro Bank NV and UBS Group AG were among those who called for action.

However, there is concern that such a system would favor financial institutions in places like Germany and France, where deposits tend to outweigh loans, rather Italy, where banks are more often net borrowers.

Bank stocks reversed earlier gains, with the Bloomberg Europe Banks and Financial Services Index down 0.5% at 2:05 p.m. in Frankfurt. They have declined about 7.5% since late March when ECB President Mario Draghi said the central bank is ready to soften the impact of negative rates if they are found to harm the transmission of its monetary policy. Deutsche Bank AG fell 1.4% and Commerzbank AG lost 1.5%.

The new system introduced by Draghi in his penultimate policy meeting as ECB president owes a lot to frameworks elsewhere in the world where central banks have opted to cut rates below zero.

The Bank of Japan decided on a tiering system simultaneously with their negative rates policy in January 2016, and began applying it 18 days after its announcement.

The Japanese version of pain relief involves breaking up banks’ deposits into three tiers -- one with a positive rate, one at zero and one that’s negative. Despite the benefit, bankers there still complain that their profits are being squeezed. “There is a limit to what banks can do to cope” with negative rates, Japanese Bankers Association Chairman Makoto Takashima said in July.

The Swiss National Bank is using negative rates to prevent an appreciation of the franc. It operates a two-level system, with amounts equal to 20 times a bank’s minimum reserves exempt from any charge. Above that level, an annualized rate of 0.75% is levied on the deposits held at the central bank.

The negative rate earned the SNB 2 billion francs in income last year. Yet the ultra-low interest rates have fueled a real estate market bonanza that risks overheating, as investors hunt for yield. They’re also very unpopular with banks. Both Credit Suisse Group AG and UBS find themselves having to balance the prospect of losing money with clients’ cash deposits against imposing fees that could prompt customers to jump ship.

--With assistance from Steven Arons.