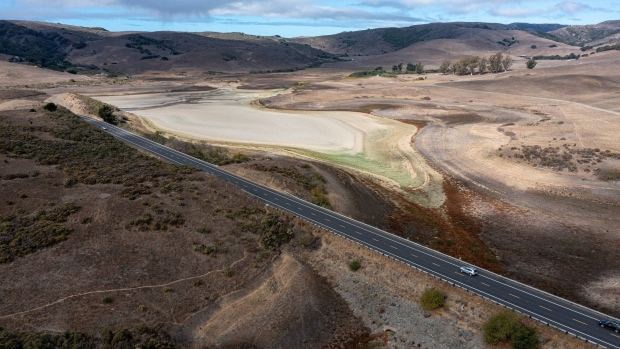 (Bloomberg) -- A river from the sky is about to wash over California and the Pacific Northwest and it could bring some relief from the fire season that has charred millions of acres across the West.

The first large atmospheric river of the season is about to pump heavy rain and deep snow across Northern California and the Pacific Northwest. The series of powerful Pacific storms that will splash through drought-parched and fire scarred regions of the West is raising the specter of mudslides and flooding from Friday. “For the first time in earnest for the season an atmospheric river is setting up for the West Coast of the U.S. for this week to this coming weekend,” said Michael Schichtel, a senior branch forecaster for the U.S. Weather Prediction Center. “It looks like, right now, the first salvo will be coming later this week around Friday,” with stronger portion coming over the weekend into early next week.

California is completely snared by drought and more than 98% of Oregon’s land is parched, according to the U.S. Drought Monitor. Both states also have several large fires burning across a landscape that has suffered from blazes throughout the summer and fall. Some forecasters are hopeful the rain and snow from this weekend’s storms will bring a halt to the fire season.

Snow that has already fallen has helped slow down the wildfire burning its way across Sequoia Kings Canyon National Parks, according to officials. So much snow fell on the fire, which is thought to have destroyed hundreds of ancient sequoia trees, that crews had to plow roads. The blaze is being battled by 695 crew members and is about 55% contained, according to a tweet by the National Park Service. A year ago, heavy snows across Colorado ended the fire season there. As of Monday, 47,525 fires have burned nearly 6.5 million acres across the U.S., with much of that occurring in the West, according to the National Interagency Fire Center. Currently 2.2 million acres have been consumed by 18 large fires in California, Idaho, Oregon, Montana, and Washington. Atmospheric rivers can unleash about the same amount of water that flows out of the mouth of the Mississippi River. A U.S. Army Corps of Engineers study found such events caused 84% of the flood damage across 11 western states over a 40-year period. They cost an average of $1.1 billion in damages annually. Forecasters rank atmospheric rivers on a five-step scale similar to hurricanes. For the central California coast this event could reach severity 4 to 5, according to the Center for Western Weather and Water Extremes. Level 4 storms are mostly dangerous but can bring some benefits, level 5 is considered “primarily hazardous.”

While the rain and snow will be heavy it probably won’t end the drought across California and the West. California is experiencing its second driest water year Oct. 1 – Sept. 30 in its history only surpassed by 1924, according to state records. The rain “won’t be a drought buster,” Schichtel said. “But is is a good way to start the season.”