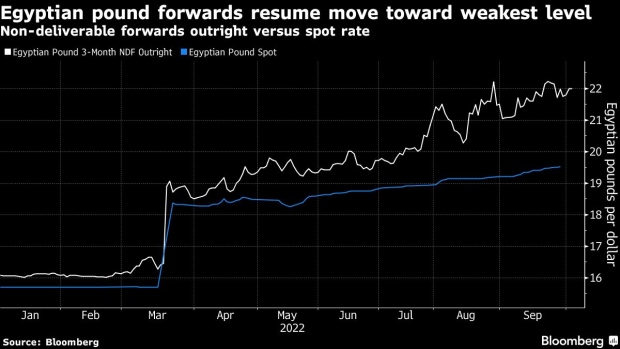 The Egyptian pound’s slow-motion descent to a record low is inviting speculation that authorities will have to let it weaken far more sharply than anticipated just weeks ago as a soaring dollar throws the currency further off balance.

Gradual declines in the pound, which Goldman Sachs Group Inc. likens to a “drip, drip, drip” of depreciation, have shaved nearly 6% of its value since mid-March, when the currency suffered a single-day drop of about 15%.

The jitters have left investors, traders and analysts bracing for a repeat devaluation of the same magnitude as in March or even deeper, as the government seeks a new loan from the International Monetary Fund, which favors a more flexible exchange rate.

In what would amount to a devaluation of about 15%, Abu Dhabi Commercial Bank PJSC now expects the pound to slide beyond 23 against the dollar once Egypt reaches a deal with the IMF, from a previous estimate of 21 to 22 about a month ago. Bloomberg Economics estimates the pound needs to weaken to 24.6 “to bring Egypt’s trade deficit to a reasonable level.”

The Egyptian currency slipped 0.2% to 19.6822 in the offshore market on Tuesday, surpassing the record low of 19.6725 reached in December 2016, according to data compiled by Bloomberg.

Traders have resumed betting for an even weaker pound since the end of last week, after paring those wagers in the wake of the central bank’s surprise decision to keep interest rates unchanged.

“I would be more inclined to prefer a significant adjustment -- and earlier -- or a much wider band if they’re going to continue managing it so that it’s not too extreme,” said Mohieddine Kronfol, the Dubai-based chief investment officer for Middle Eastern and North African fixed income at Franklin Templeton.

Behind the urgency is a worry that the pound still remains too expensive to support an economy that’s grappling with a shortage of dollars. The government has already conceded a more flexible currency is necessary to cope with the fallout from Russia’s invasion of Ukraine.

Before its devaluation in March, the pound had been kept stable against the dollar for about two years.

“Policy makers may be concerned about the side-effects of another large devaluation. So they could end up weakening the currency, but by less than the economy needs.”

Another source of pressure is the dollar’s relentless rise that’s battering the currencies of Egypt’s trading partners and developing peers -- from the Chinese yuan to the euro and Turkey’s lira.

The challenge for Egypt is how to win back the confidence of global investors who have shunned its local debt on expectations of further weakness in the pound. To attract buyers, Egypt has had to raise the yields on its Treasury bills by the most since 2016.

Policy makers should opt for a one-step depreciation to between 21 and 22 per dollar, according to Goldman Sachs, which would be in line with the three-month non-deliverable forwards market.

“The slow devaluation of the currency is reinforcing expectations that the pound is only going to get weaker,” he said. “They need to change that expectation.”

A key reason why Egypt is opting to go slow is to keep a grip on inflation, which has already accelerated to its fastest level in almost four years.

Carla Slim, an economist at Standard Chartered Plc, sees the pound at 20.75 by year-end and predicts “a continuation of gradual weakening to limit the pass-through to inflation.”

Egypt, one of the Middle East’s most indebted countries, is also looking elsewhere to mitigate the rising cost of servicing its liabilities. Its wealthy allies in the Gulf Cooperation Council have already pledged more than $20 billion in deposits and investments.

“Egypt’s debt composition and available stabilizing mechanisms -- ranging from GCC support to the prospective IMF program -- are some of the dynamics that could facilitate gradual depreciation of the pound,” said Adriaan du Toit, London-based director of emerging market economic research at AllianceBernstein.

As policy makers try to balance the demands of investors against the risk of causing more economic pain for Egyptians, the danger is of an even bigger devaluation ahead.

“The delay in weakening the Egyptian pound means that the adjustment will now likely have to be sharper and, in our view, should be accompanied by a sizable rate hike to anchor policy credibility,” said Monica Malik, chief economist at Abu Dhabi Commercial Bank.