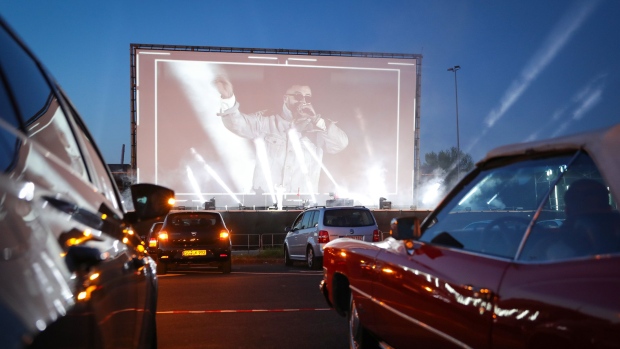 One of the first drive-in concerts of the current pandemic era took place in mid-March, in the parking lot of a Los Angeles supermarket. The event was co-organized by online radio station Dublab, and local musicians took turns occupying a white van, fiddling with synthesizers and using an FM radio transmitter to broadcast ghostly synth tones into the stereos of around 50 cars in attendance. The night air was quiet and still, attendees reduced to shadowy silhouettes lounging in the safety of their vehicles. At the end of the show, a chorus of car horns and flashing lights served as applause.

Musician and event co-organizer Celia Hollander later told a circle of admirers: “I had this idea [before COVID-19], but felt the social isolation went against what I valued about live shows, so I never did it.” She chuckled. “Now, this was the most social thing I’ll do all week.”

@dublab is live-streaming and transmitting to local radio from inside a van on a rainy Los Angeles night. #streetphotography #echopark #socialdistancing #portraitphotography #fujifilmxt3 #fujixt3

A post shared by Chava | Film | Photographer (@chavatakesrealterriblepictures) on Mar 16, 2020 at 9:52pm PDT

Few could have predicted the current resurgence of drive-in entertainment, which has taken off as a global phenomenon in recent weeks. Everything from strip clubs in Portland, Ore., to church services in Seoul have adopted the format, while drive-in movie theaters have evolved from quaint relics of a bygone era to some of the hottest tickets in town. It’s little surprise the battered live music industry, facing a year without concerts or festivals, is also seizing on drive-ins as a potential lifeline.

LOOKING FOR AN AUDIENCE

Country star Keith Urban performed a surprise show Thursday night for some 125 cars at a drive-in outside Nashville. This Saturday, InfieldFest at the Preakness Stakes will become Drive-InFieldFest, with both the thoroughbred horse race and traditional music festival postponed. Instead, 200 first responders are being invited for an hour-long set by DJ D-Nice with free food and Budweiser Zero.

Industry leader Live Nation Entertainment Inc.—which saw a 25 per cent drop in concert revenue in the first quarter of 2020—recently announced a series of car-centric concerts called “Drive-In Live,” a multi-artist tour through four Danish cities this summer that will even turn the parking lot of the Copenhagen Airport into a drive-in venue.

Each drive-in concert will accommodate 600 cars, with tickets charged per car and up to five people welcome per vehicle. Live Nation’s President and Chief Executive Officer Michael Rapino compared this to more intimate music venues. “There are a lot of great artists that can sell out an arena, but they’ll do 10 higher-end, smaller theaters or clubs,” Rapino told his investors on an earnings call last week. “We can make the math work.”

Reduced-capacity is, after all, the new reality, from theme parks to restaurants to genuine concert venues. Whether drive-in concerts can become a new norm structure for live music, the way paid Zoom clubs and livestreams have for nightlife, remains to be seen.

For big stadium artists, or upbeat genres that spark irresistible urges to dance, the fit can be especially awkward. Marketing agency Seerendipity provided Bloomberg with results of a social media poll of over 1,000 past attendees of Made Events, the New York-based organizer behind the Electric Zoo festival and hundreds of other concerts: Some 38 per cent of respondents said they would not attend a drive-in show. The music fans also voiced concerns around environmental impact, the availability of bathrooms, and drunk driving.

Alcohol revenue is an open question. Both live music venues and promoters have been traditionally dependent on liquor sales, sometimes with artist fees adjusted according to bar guarantees. But with most drive-in theaters prohibiting booze, concert organizers will have to find alternative revenue to become a sustainable model for live music in the age of social distancing—or remain just a test-drive that never leaves the lot.

Electronic musician Marc Rebillet is hoping, like Live Nation, that fans will see this as a premium experience. Tickets to his shows usually go for US$15 to US$25, but this June he will embark on America’s first drive-in music tour, charging around US$50 per person in required batches of at least two.

“The margins are very thin,” adds Rebillet, noting that alcohol will not be sold, but he hopes to incorporate food delivery to cars by workers in masks and gloves for later stops on the tour, following guidelines from the Centers for Disease Control and Prevention. The five-city tour includes stops in Houston, Kansas City, Mo., and Charlotte, N.C. “We’re hoping people are willing to pay a premium to be around each other, and are banking on them buying merch and concessions,” Rebillet says. “Still, it’s not my most profitable tour.”

“The overhead is higher due to the fact that many drive-through theaters are exclusively equipped for films,” explains Rebillet’s music agent Adam Ogushwitz. “We are building these events from the ground up, including staging, cameras, and video production.”

In the absence of liquor sales, brand sponsors could offer a boon. At one of Live Nation’s recent drive-in concerts with Danish singer-songwriter Mads Langer, large screens flashed the logo of the event’s sponsor, Skousen, a Danish home appliance chain.

“Millions of dollars have already been earmarked in budgets for festivals, and if those events don’t take place, big money guys like T-Mobile and Mastercard will put the money elsewhere,” noted Seerendipity founder Michael Julian. “Sponsors are definitely thinking about how to put that money into livestreams, virtual festivals, and drive-in shows.”

Promoters and artists also need to rethink how to recapture the electricity of a live concert experience when artist-audience interactions are severely limited by the constraints of vehicles. Is it enough to simply just put a performer on stage and pipe in music through car stereos? For some fans, maybe.

Curiosity and novelty may drive initial sales. For less-ardent concertgoers, though, if the experience isn’t fun—if it doesn’t offer the social connection or catharsis that live events usually provide—they might not come back to see a second event. Rebillet considers it an exciting challenge: “I’m having a blast thinking of ways to creatively engage the crowd in different ways—through car horns, lights, and windshield wipers,” he says.

At a 250-car drive-in rave held earlier this month in the parking lot of German nightspot Club Index, lasers and fire cannons accompanied a pounding set by DJ Devin Wild, who produced a track called Smash Your Horn just for the occasion. “People were smashing their horns, and sometimes you’d see fists pumping through the windows,” Wild says, noting that “some people had trouble staying in their cars.”

“I kept hearing from people about how bad they needed this,” says Ben Ballinger, a folk singer-songwriter who threw a 25-car drive-in show in an open field in Austin, Tex., on May 7. The pandemic had allowed him to see drive-ins in a new light: What once seemed strange is now seductive.

“People have different expectations now,” says Ballinger, echoing the musicians at the Los Angeles supermarket drive-in. “Before, I would have never wanted to attend something like this myself, but now it’s the best show in town.”