Latest U.S. jobless claims number 'could have been worse': Economist

Applications for U.S. unemployment benefits unexpectedly fell last week to the lowest since March, offering a ray of hope for an economy still battered by the pandemic.

That was the largest improvement in almost two months. Continuing claims -- the total number of Americans claiming ongoing unemployment benefits in those programs -- decreased to 16.1 million in the week ended July 25, the lowest since April.

Even with the drop, initial claims were more than five times pre-crisis levels. Analysts have cautioned that it could take some time to confirm a sustainable trend in improvement -- especially if the expiration of the weekly US$600 in federal benefits discouraged some from filing claims.

With cumulative job losses numbering in the tens of millions, it will take not just steady improvement in the number of weekly claims, but also in hiring, for the labor market to rebound to any semblance of its pre-pandemic state. 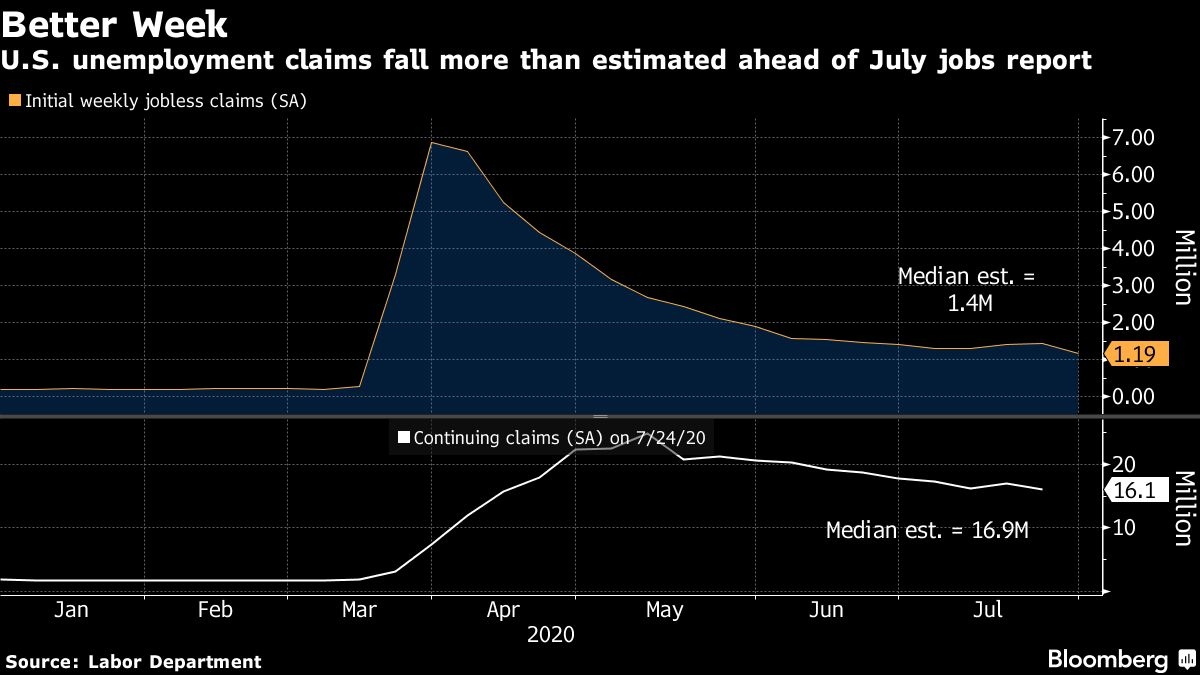 “A combination of uncertainty from rising virus cases to the withdrawal of financial support is concerning for an already fragile recovery,” said Daniel Zhao, senior economist at jobs website Glassdoor. “The economy is still in deep risk of falling sideways -- where conditions improve so sluggishly that the effects of the crisis become increasingly permanent.”

The labor market had been showing signs of stalling in recent weeks as a resurgence in virus cases, beginning in mid-June, led a slew of states to halt or even reverse reopenings. That surge has begun to ebb, potentially supporting hiring, but the outlook could deteriorate once again as businesses exhaust funds from the Paycheck Protection Program.

Meanwhile, the extra US$600 in weekly jobless benefits that have helped keep incomes and spending afloat in recent months has expired, threatening the fragile economic rebound.

Lawmakers and the White House are struggling to agree on a new stimulus package that would once again bolster the size of millions of Americans’ unemployment checks, but even with a deal, it could take several weeks for the unemployed to actually see that money. Such a gap would further strain families who have depleted their savings and are unsure on how they will afford their next rent payment.

“It will take several weeks to judge whether this is the start of a renewed trend toward improvement, or a blip within the current pattern of slowing job-market recovery. Layoffs remain well above even the Great Recession high, threatening the overall outlook.”

Data out Wednesday from the ADP Research Institute showed hiring at U.S. companies remained positive in July, but the pace of job growth slowed sharply, with some industries, like financial activities, even seeing small declines.

The monthly jobs report on Friday is expected to show a similar picture, with the median estimate calling for a 1.5 million monthly increase in nonfarm payrolls after a 4.8 million surge in June.

On an unadjusted basis, initial claims decreased to 984,192 nationwide, the first time since mid-March it dropped below 1 million. All states but Rhode Island, which showed little change, posted declines from the prior week. Even in states where coronavirus cases have been elevated, including California, Texas and Florida, applications for benefits fell in the latest week.

“The labor market basically hit a big pothole in July, but we also know that activity, there are still a bunch of sectors that are still doing reasonably well all things considered,” Neil Dutta, head of economic research at Renaissance Macro Research LLC, said on Bloomberg Television. The labor market should improve in August amid gains in housing and autos and the need for inventory restocking, he said.

In addition to applications for unemployment benefits in regular state programs, in the week ended Aug. 1, states reported 655,707 initial claims for Pandemic Unemployment Assistance, the lowest since April. That’s the federal program extending unemployment benefits to those not typically eligible like the self-employed.

As the pandemic drags on, more and more people are beginning to claim Pandemic Emergency Unemployment Compensation, the federal program that provides up to 13 additional weeks of jobless benefits to those who have exhausted their regular benefits. While most states offer 26 weeks of benefits, others, such as Florida and North Carolina offer less than half of that. More than 1.1 million people were claiming the aid in the week ended July 18.

The total number of people claiming benefits in all programs increased to 31.3 million in the week ended July 18, though this figure reflects states’ overcounts of reported PUA continued claims.

--With assistance from Sophie Caronello, Maeve Sheehey and Ana Monteiro.