A massive tide of purchasing power is shifting towards online buying: Bruce Croxon

U.S. retail sales fell in July by more than forecast, reflecting a steady shift in spending toward services and indicating consumers may be growing more price conscious as inflation picks up.

The value of overall retail purchases dropped 1.1 per cent last month following an upwardly revised 0.7 per cent increase in June, Commerce Department figures showed Tuesday. The median estimate in a Bloomberg survey of economists called for a 0.3 per cent decrease. Excluding autos, sales decreased 0.4 per cent in July. 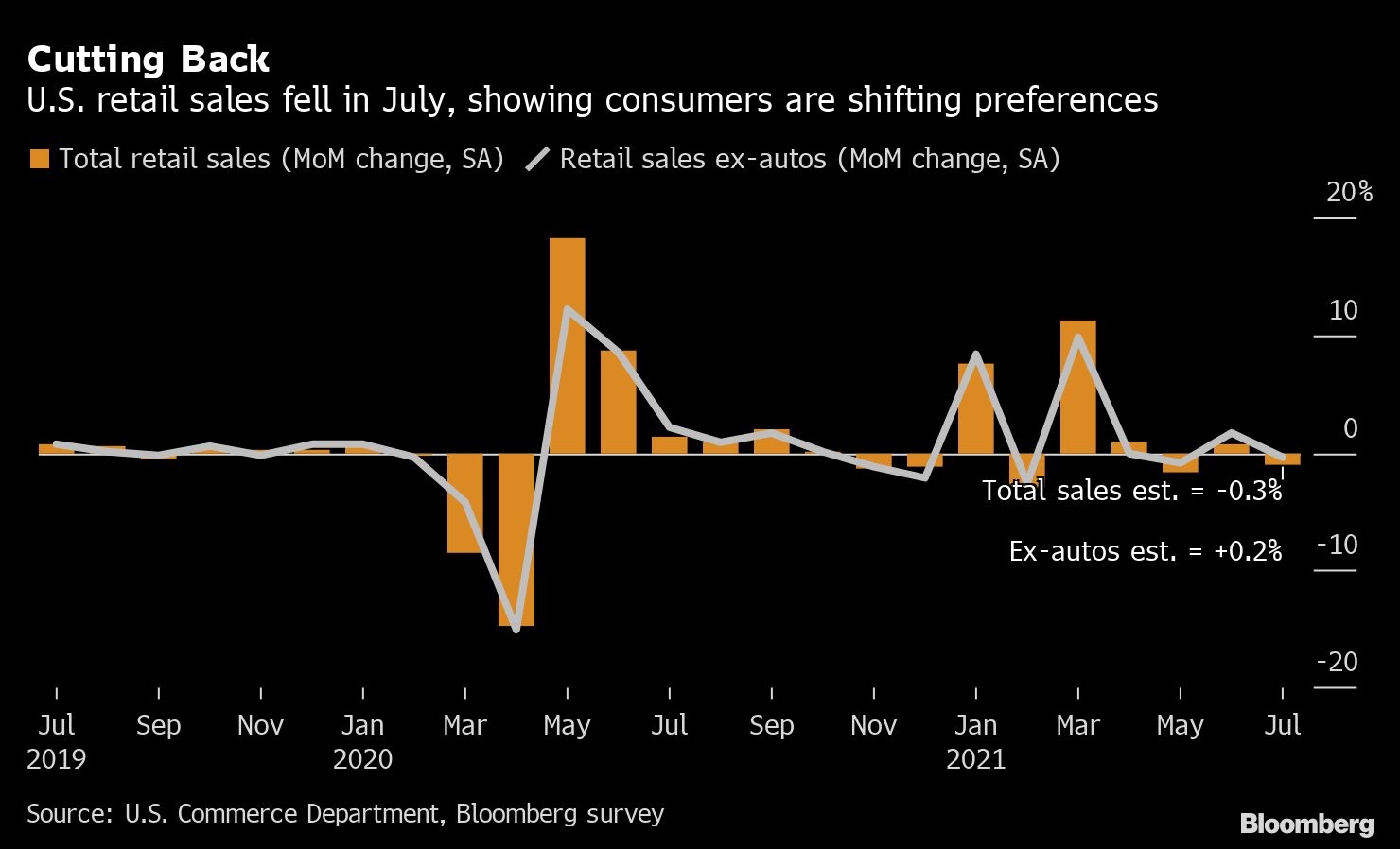 Total receipts trailed estimates by a wide margin as declines in motor vehicle and e-commerce sales weighed on the figure. Restaurant spending increased, though at a more moderate pace than in previous months.

The emergence of the delta variant could curb demand for services like travel and entertainment going forward. Higher prices for things like groceries, meals out, personal care and apparel also risk limiting discretionary spending in the coming months.

A report last week from the University of Michigan showed buying conditions deteriorated to the lowest since April of last year as inflation remained elevated. The retail sales data are not adjusted for price changes.

The figures Tuesday point to a softening in third-quarter consumer spending growth. Economists forecast outlays to grow at an annualized 4.5 per cent pace in the current period, significantly slower than the pace estimated a month ago and a sharp deceleration from the sizzling 11.8 per cent rate seen in the second quarter.

Morgan Stanley economists led by Ellen Zentner said the weakening in sales lowered their tracking estimate for third-quarter economic growth to 6.5 per cent -- the same as last quarter -- from 6.9 per cent.

Results from Home Depot Inc., however, showed weaker-than-expected results that signal a cooling in the home-improvement boom.

According to the Commerce Department’s report, the drop in July sales was fairly broad with 8 of 13 categories registering decreases.

Sales at restaurants, the only services-spending category in the retail report, rose 1.7 per cent, the smallest advance in five months. Restaurant spending could soften in the coming months, depending on the path of the delta variant. Total card spending from Bank of America Corp., decelerated at the end of July, while OpenTable restaurant bookings have moderated.

Motor vehicle and parts dealer sales slumped 3.9 per cent in July after a 2.2 per cent slide a month earlier, likely in response to limited inventory and higher prices as automakers face supply chain constraints.

Sales at non-store retailers, which include e-commerce, fell 3.1 per cent in July, a sharp slowdown from the prior month likely reflecting Amazon.com Inc.’s move of Prime Day -- an annual sales event for online shoppers -- to June.

There were also declines in sales at apparel retailers, building-supply outlets and furniture stores.