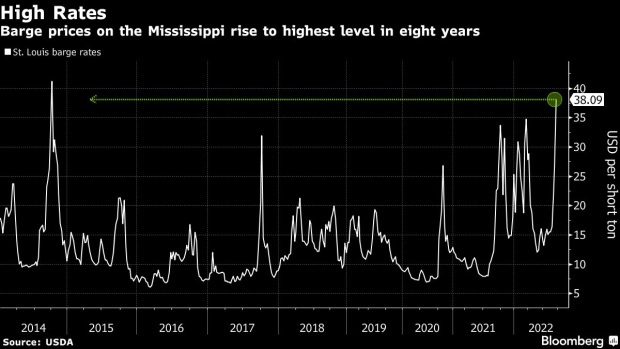 Drought is drying up the crucial US water artery. That means less room for vessels shipping out corn and soybeans, the biggest US crops. Barge rates reached $49.88 per ton on Tuesday, the highest on record and up nearly 50% from a year ago, according to a government report released Thursday.

The Mississippi River is by far the largest US export channel for corn and soybeans, accounting for more than half of the shipments bound for the world market. The barge woes are hitting at harvest time when supplies will be the biggest, and follow a harrowing season of weather setbacks and soaring inflation for farm necessities like fuel and fertilizer.

“It’s game time,” said Mike Steenhoek, executive director of the Soy Transportation Coalition. “We need our supply chain to be operating on all cylinders.”

US farmers are under intense scrutiny this year as the world is counting on their harvests to help restock food reserves drained by Russia’s war in Ukraine. Farmers stand to see less for their crops as grain companies typically are willing to pay less for crops when it costs more to ship them.

“The tight barge supply is problematic for grain shippers heading into harvest,” the US Department of Agriculture said in its weekly grain transportation report. Increased demand “will likely put even more upward pressure on barge rates.”

Fertilizer sought by US grain producers also are at risk, raising the prospect of renewed price surges for crop nutrients like nitrogen at a time of worsening food inflation.

Limited vessel capacity follows freight railroad disruptions earlier this month and ongoing challenges in securing trucks. The nationwide labor crunch is also a problem as the barge industry is having difficulty hiring and retaining workers, according to USDA.

Cargo from barges is unloaded and then reloaded onto larger bulk vessels for the world market. According to the Iowa Department of Transportation data, one barge can hold the same amount of 16 rail cars or 70 large semi trucks.

Meanwhile, lack of rain has sent the water route by Cairo, Illinois, where the Ohio River flows into the Mississippi, to critically low levels. It’s forecast to drop even more in October, according to US government data.

A single shipment of soybeans, the second-biggest US crop export after corn, has been cut in size by as much as 38%, according to Steenhoek.

The corn industry depends on the Mississippi River for moving 65% of its exports. It’s also the most “efficient and cost effective way for the corn belt to receive inputs,” said Matt Ziegler, public policy manager at the National Corn Growers Association.

While barge scarcity and rate spikes could be “detrimental” to growers, “I’m not sure there’s much we can do about it,” Ziegler said.