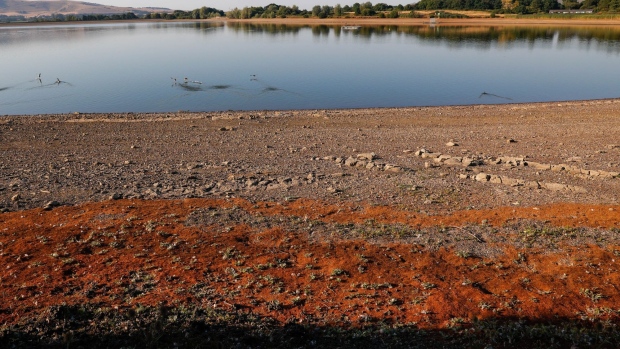 (Bloomberg) -- England is officially in a drought across vast swathes of the country, the government’s Environment Agency has announced, as another heat wave intensifies and water companies impose restrictions on household use.

Parts of western, southern, central and eastern England were put into “drought” status following a meeting of the National Drought Group on Friday. England, normally associated with drizzly weather, recorded its driest July since 1935, according to the Met Office, and is facing a new reality of heat waves and pressure on the water supply in the summer months.

“The current high temperatures we are experiencing have exacerbated pressures on wildlife and our water environment,” said Harvey Bradshaw, chair of the National Drought Group.

The UK is currently struggling on many fronts. Surging energy prices, that millions of households can’t afford to pay, a shrinking economy and roaring inflation are creating an acute cost-of-living crisis that’s set to deepen this winter.

The extreme weather is a stark reminder that a changing climate threatens not only to weaken infrastructure but also to disrupt daily life. Houses are subsiding as a result of especially dry soil, LV= General Insurance said this week. It reported a 205% increase in subsidence cases in June and July. Supermarkets have stopped selling disposable barbecues due to the risk of spreading fires.

Read More: Drought Is Declared in England: So What Happens Next?

However, the drought is not only affecting England. Data from late July shows that 47% of European Union countries are facing drought warning conditions and 17% are at alert levels, the European Drought Observatory says. Wildfires have flared up in France as it endures a third heat wave and its worst drought on record. German state forecaster DWD has also warned that in some areas there is a very high risk of forest fires.

While the new drought status in English regions will not necessarily trigger new policies, it underscores the effects of the unfolding climate change crisis as countries burn fossil fuels. The reality of not having enough water is raising questions in the UK about the amount wasted by companies through leaks and if more can be done to prevent that and soon.

“This drought is very serious,” Tory party leadership contender Rishi Sunak told Times Radio on Friday. “And it actually shines a light on what we need to do, which is make sure our water companies are fulfilling all their obligations to us in correcting leaks.”

The Mayor of London Sadiq Khan has also urged Londoners and water companies to help the city save water.

“While I am urging water companies to act swiftly to stop the leaks which are leading to millions of gallons of water being wasted every day, Londoners can also play their part by saving water as much as possible at home,” Khan said. “We need everyone to pull together to help conserve this precious natural resource.”

Earlier on Friday morning, Yorkshire Water Services Ltd. became the fourth water company to announce or impose a hosepipe ban. It said the measure, which prevents people from watering their gardens or washing cars, would start on Aug. 26. Yorkshire Water serves 5.4 million people and 140,000 businesses, according to its website.

High temperatures and dwindling water supplies are affecting Britain’s agricultural industry too. Some river levels are also at the lowest levels ever recorded.

“The situation on the ground continues to be hugely challenging across all farming sectors,” said Tom Bradshaw, deputy president of the National Farmers’ Union. “Many farmers are facing serious impacts ranging from running out of irrigation water to not having enough grass and having to use winter feed.”

The UK Health Security Agency has extended a health alert for England by two days until Aug. 16.

Some relief may be in sight with the Met Office issuing a so-called yellow weather warning for thunderstorms expected to hit most of the UK on Monday next week, which could bring much-needed rain.