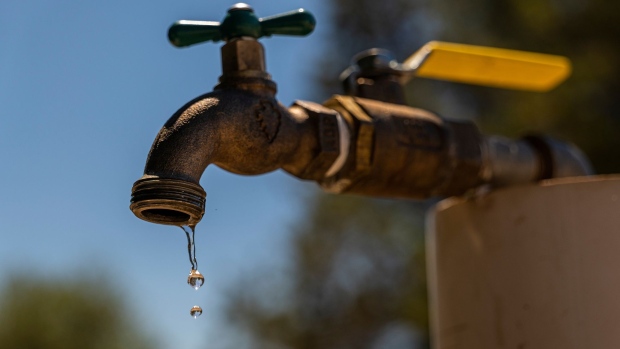 Water drips from a faucet at Lake Mendocino during a drought in Mendocino County, California, US, on Wednesday, Aug. 10, 2022. California water prices are at all-time high as a severe drought chokes off supplies to cities and farms across the Golden State. Photographer: David Paul Morris/Bloomberg , Bloomberg

Water agencies that supply 27 million people in the most populous US state will receive 5% of what they requested in 2023, according to an initial estimate from the California Department of Water Resources. The allocation will come from the State Water Project, a massive network of reservoirs, canals, pipeline and hydroelectric power plants that delivers water to cities and towns as well as 750,000 acres of farmland.

The announcement comes as California has suffered through its driest three-year stretch on record, parching farmland, driving water prices to an all-time high and leaving some cities at risk of running out altogether. Despite a series of storms now drenching the state, officials are warning of another year of below-average rain and snow.

“We are in the dawn of a new era of State Water Project management as a changing climate disrupts the timing of California’s hydrology, and hotter and drier conditions absorb more water into the atmosphere and ground,” Department of Water Resources Director Karla Nemeth said in a statement. “We all need to adapt and redouble our efforts to conserve this precious resource.”

California typically gets half of its precipitation over the winter months and officials will adjust allocations to cities and farms based on how much rain and snow it gets over its wet season.