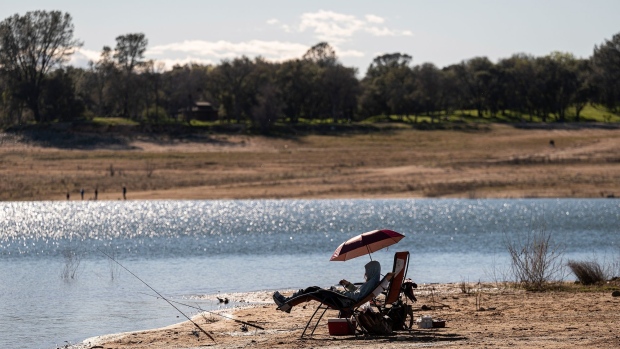 A fisherman on the shore of Folsom Lake during a drought in Folsom, California on Feb. 21. Photographer: David Paul Morris/Bloomberg , Bloomberg

The region faces another spring and summer of dwindling water resources and rising temperatures, according to an outlook released Thursday by the National Oceanic and Atmospheric Administration.

From April to June, chances remain high that little rain or snow will fall from Northern California and Oregon across a wide swath of the Rocky Mountain states to Texas and the U.S. Gulf Coast, according to NOAA’s Climate Prediction Center. At the same time, warmer-than-normal temperatures will permeate most of the contiguous U.S. except for parts of the Pacific Northwest.

“Severe-to-exceptional drought has persisted in some areas of the West since the summer of 2020 and drought has expanded to the southern Plains and Lower Mississippi Valley,” said Jon Gottschalck, chief of the operational prediction branch of the Climate Prediction Center.

“With nearly 60% of the continental U.S. experiencing minor to exceptional drought conditions, this is the largest drought coverage we’ve seen in the U.S. since 2013,” he said.

The dry land will likely cause another summer of brutal heatwaves across the western U.S. as the lack of soil moisture will let the sun’s energy bake the air instead of evaporating water. This could lead to further power-grid problems across the West, where heat has caused rolling blackouts in California in 2020, and the threat of wildfires caused preventative outages farther afield.

A lack of snow across most of the West -- except for Colorado -- as well as below-normal rain helped propel the region into another year of drought. Unlike the eastern U.S., which sees storms throughout the year, much of the western part of the country gets most of its water during winter in the form of rain and snow.

“It does set the stage for more likely heat-wave events,” Gottschalck said on a webinar with reporters.

Currently, almost 90% of nine western states is gripped by drought including all of California, Nevada and Utah, as well as nearly 99% of New Mexico, according to the U.S. Drought Monitor. Washington, Oregon, Montana and Arizona are all dealing with drought that stretches back more than two years in many places.

In addition to the West, Texas, as well as most of the Great Plains are wilting under drought conditions.