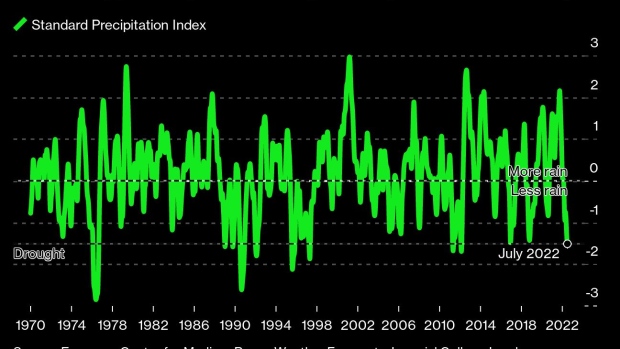 (Bloomberg) -- With England baking under an extreme heat warning, government officials and water companies meet today to try to assess what’s shaping up to be the worst drought since 1976.

The drought could be made official in some parts of the south, the Press Association reported on Thursday, an increase from the current status of “prolonged dry weather” across most of England.

Yorkshire Water became the latest utility to announce a hosepipe ban this morning, starting on Aug. 26. Three other water companies have already announced or implemented bans, which prevent people from watering their gardens.

The Environment Agency has four stages as it seeks to categorize the severity of dry weather. After prolonged dry weather and drought, there is “severe drought” and then “recovering from drought”. Moving up a notch can lead water companies to impose more restrictions on households and businesses.

England -- renowned for drizzly weather -- suffered its driest July since 1935, according to the Met Office, and is facing up to a new reality of heat waves and pressure on the water supply. The stark reality of not having enough water is raising questions about the amount of water wasted by companies through leaks and if more can be done to prevent that and soon.

Since the National Drought Group last met, on July 26, attention has increasingly turned to the quantity of water that leaks from the system -- and the record of privatized water companies that run each region. Liz Truss, the front-runner in the race to become the next Conservative leader and prime minister, said the government “should be tougher on water companies” and that not enough has been done to fix “leaky pipes which have been there for years”, according to newspaper reports.

Her rival in the leadership race, Rishi Sunak, said on Thursday night that “nothing is off the table” when it comes to forcing water companies to address leaks. The utilities “can and must step up,” he said according to a hustings event run by The Telegraph newspaper.

Official drought status will not necessarily trigger new actions but water companies have pre-agreed drought plans which they can enact.

Thames Water Ltd. revealed on Tuesday that it will impose a hosepipe ban on Londoners in the coming weeks. A ban is due to come into effect in Kent and Sussex tomorrow, an area served by South East Water Ltd., while Hampshire and the Isle of Wight are already subject to restrictions by Southern Water Ltd., which prevent people from watering gardens, cleaning cars or filling swimming pools.

Restrictions could even extend to businesses if rain levels remain low in the months ahead. “We don’t know when the drought is going to end,” Cathryn Ross, strategy and regulatory affairs director at Thames Water said in an interview with Bloomberg radio. Ross said that while there were no current plans to go beyond the hosepipe ban, the company could be forced to act, “with a heavy heart”, if the problem worsens.

Her warning came just days after a large 36-inch pipe burst in north London, flooding roads and cutting off water supplies to thousands of homes and businesses. Water companies risk stoking more public anger with restrictions on customers while billions of liters leak out of the system that they are expected to maintain.

The extent of water leaks in England is considerable. The Green Party claims three billion liters are wasted every day, while a recent report in the London-based Times newspaper put the number at 2.4 billion liters.

Thames Water said on its website that it leaks 24% of the water it supplies.

More can be done

Ofwat, the water and sewage industry regulator in England and Wales, said toward the end of last month that three-quarters of water companies are meeting targets to reduce leaks, but added “there is more that can be done”.

Thames Water has cut leaks by over 10% in the last two years, Ofwat said, but Southern Water and South East Water were further behind on 5% and 3.3% respectively.

Executive pay levels in the industry have fallen under the spotlight, given the hosepipe bans and criticism of the companies’ performances. Thames Water Chief Executive Sarah Bentley was paid over £2 million in 2022, up 66% from £1.2 million a year earlier. The company said this was partly due to extra compensation for money owed at her previous job.