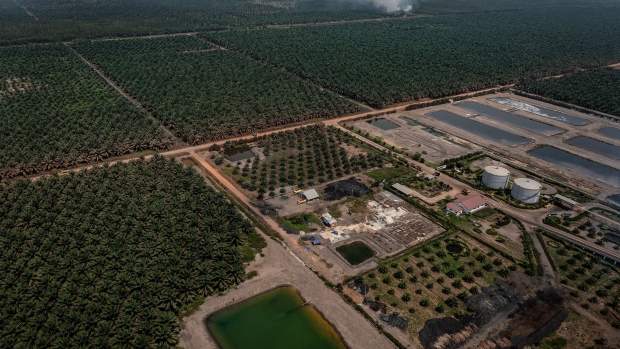 Wildfires, smoke and drought are inflicting an increasingly painful toll on Indonesian agriculture, hurting everything from palm oil plantations to rubber trees and rice fields.

Raging forest fires in Sumatra and Borneo may curb supplies of palm oil and rubber, while a longer than usual dry season in Java has wilted some of the country’s rice crop, which is the main staple for 270 million people.

Smoke from illegal burning to clear land in Indonesia has been worse than usual this year and spread across Southeast Asia, causing flight disruptions and respiratory illness for thousands of people. While Indonesian President Joko Widodo ordered a crackdown on arsonists, there may be little respite soon as the rainy season won’t start before late October, the weather bureau says. Forest fires to clear land have also wrought havoc in the Brazilian Amazon.

Drought and haze have set back ripening of palm oil fruit and disrupted operations at plantations and mills, potentially slowing production growth this year to about half last year’s rate of 13%, said Joko Supriyono, chairman of the Indonesian Palm Oil Association. Dry weather normally takes a while to show up in production, with a greater impact likely to be seen in 2020, he said.

The worse than expected dry weather in Sumatra and Kalimantan in Indonesia and Sabah in Malaysia may reduce output from older palm trees, according to Marcello Cultrera, institutional sales manager at Phillip Futures in Kuala Lumpur. The haze from the forest fires has a small impact on palm oil extraction rates and output in the very short term, he said.

Farmers in Sumatra and Borneo are using illegal slash-and-burn techniques, which are much cheaper than other methods, to clear land for palm oil, pulp and rubber plantations. More than 320,000 hectares have been burnt in the first eight months of the year, according to the National Disaster Mitigation Agency.

While Java, Indonesia’s top rice producer, hasn’t been hit by wildfires, a prolonged drought has parched farmland, damaging more than 250,000 hectares of rice and causing more than 580,000 tons of losses, according to Edy Purnawan, director of crop protection at the Agriculture Ministry.

The government is urging farmers to plant seeds suitable for dry land for the small harvest in the fourth quarter, to try to make up the production losses, Purnawan said.

While the area affected is small compared with Indonesia’s total rice plantings over about 9 million hectares, a less significant crop failure last year contributed to the government boosting imports to the highest in six years. Ample stockpiles with state-owned Bulog will likely prevent major new imports this time round.