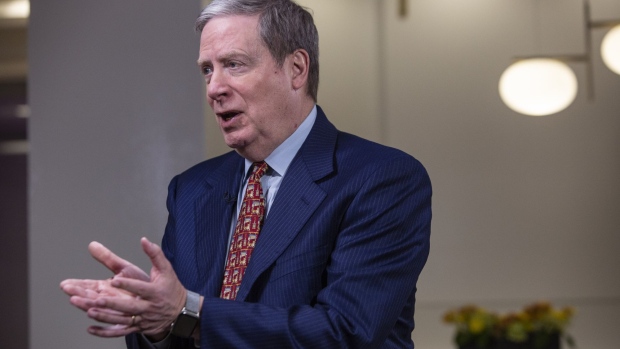 Stanley Druckenmiller, chief executive officer of Duquesne Family Office, speaks during a Bloomberg Television interview in New York, U.S., on Monday, Dec. 16, 2019. Duquesne increased its bets on Amazon and GE, reduced its holding in Netflix by more than a third, and ditched its position in bankrupt utility giant PG&E in the third-quarter. , Bloomberg

(Bloomberg) -- Stanley Druckenmiller has a warning for Wall Street: The sharp decline in the stock market isn’t over just yet.

“My best guess is that we’re six months into a bear market,” Druckenmiller, who runs Duquesne Family Office, said Thursday at the 2022 Sohn Investment Conference. “For those tactically trading, it’s possible the first leg of that has ended. But I think it’s highly, highly probable that the bear market has a ways to run.”

The Nasdaq Composite Index has dropped more than 20% from its previous peak -- the traditional definition of a bear market. While the S&P 500 came within points of that threshold intraday on May 20, a late afternoon rally technically kept the bull market intact for the benchmark, which has since rebounded 3%.

The catalyst for additional losses is that the Federal Reserve has turned aggressive about tackling the highest inflation in decades. That will likely lead to a recession at some point in 2023, Druckenmiller said.

About a year ago, he said the central bank’s policy was totally inappropriate and that “we are in a raging mania in all markets.”

“That period was incredibly costly, because a lot of assets were purchased during that period that a lot of people moving out the risk curve will lose a lot of money on,” said Druckenmiller, 68, who managed money for billionaire George Soros for more than a decade.

Greenlight Capital’s David Einhorn, appearing at the same conference, said inflation is the big problem and that it’s likely to persist, in part because of under-investment in things such as cement, housing, mining oil and paper.

Over the past six to eight months, Druckenmiller said he has bet against fixed income and stocks, avoided doing much with currencies and owned key commodities such as oil, gold and copper. During the first quarter, Duquesne exited shares of Google parent Alphabet Inc., Airbnb Inc. and Carvana Co., while adding to its position in Chevron Corp., regulatory filings showed last month.

Because US Treasury yields are so much lower than inflation, he said he’s not confident bonds will hold up in a downturn as they have in the past. So he’s largely taking a break from trading for now.

“While I’m not comfortable owning bonds, I’m much less comfortable being short fixed income to the degree I was three to six months ago,” he said. At the same time, “I’ve lived through enough bear markets that if you get aggressive in a bear market on the short side, you can get your head ripped off in rallies.”

Still, Druckenmiller expects to short stocks again if the market presents the right opportunity. He also said he’s looking to bet against the dollar sometime in the next six months.

“If you’re predicting a soft landing, it’s going against decades of history,” he said.

Druckenmiller has a net worth of about $10 billion, according to the Bloomberg Billionaires Index.

For more on Sohn Investment Conference, click here to read our TOPLive blog.