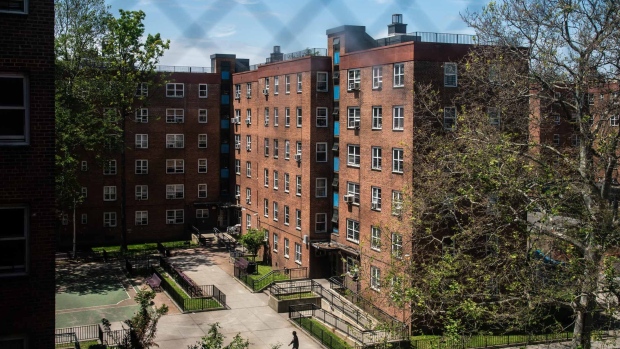 (Bloomberg) -- Red Hook was a ghost town when Greg O’Connell started buying property in the Brooklyn neighborhood more than four decades ago.

“You could drive down Van Brunt Street on a Sunday on a bike with no clothes on and it wouldn’t make any difference,” said O’Connell, a former New York detective whose accent betrays his Queens roots.

But O’Connell saw opportunity in the abandoned Civil War-era warehouses in the shadow of the Statue of Liberty and wasn’t intimidated by the lawlessness and drug use. He acquired properties for next to nothing—“Nobody wanted them,” he said—and now owns about 1.3 million square feet of buildings and another 385,000 square feet of undeveloped land in Brooklyn, mostly in Red Hook. O’Connell, 77, said he doesn’t track the value of his holdings, but Bloomberg estimates they’re worth at least $400 million.

His success in helping to revive one of New York’s grittiest neighborhoods has also created new challenges for the area, as well as for the one-time narcotics cop. While O’Connell attempts to balance the scales by subsidizing some rents, many residents are being priced out of an area that was briefly an affordable enclave in an increasingly expensive city. What’s more, the worry—or the hope, depending on one’s point of view—is that prices will only go up from here, thanks to recent tax changes.

Red Hook is already on the front lines of hipster-led gentrification, and once-deserted Van Brunt Street is its main drag. On a recent sunny day, a bearded man in Ray-Bans walked with a baby in a Keith Haring print carrier past a record shop toward the Tesla dealership. Young couples with Birkenstocks and iced coffees strolled past art galleries and apartments with seven-figure price tags.

“Not in my wildest dreams would I ever believe that there was such a thing as a million-dollar condo, but they sell ’em” in Red Hook, said O’Connell, who paid $4,000 in 1976 for his three-story home on Warren Street, which is now worth more than $1.2 million.

He may soon see more of them. The increasingly affluent waterfront neighborhood—also home to the city’s second-largest public housing project—was recently named an opportunity zone as part of the 2017 federal tax overhaul. According to Urban Institute senior fellow Brett Theodos, this will attract more development and probably inflate property prices.

O’Connell, who said he was unaware of the opportunity zone designation, worries it may make it harder to continue his way of doing business. While he rents to companies like Fairway Market and Ample Hills Creamery, many of his tenants are nonprofits that get the space for free or below-market rates. And if land values and taxes continue to rise, he frets he’ll have to ask them to chip in more.

“It’s something I really don’t like,” said O’Connell, known for wearing overalls while driving around the neighborhood in his pickup truck. “The nonprofits do so much good for the neighborhood.”

That philosophy is what separates him from the usual New York builder, according to the Center for an Urban Future’s Jonathan Bowles, who has described O’Connell as a “socialist developer.”

“He’s a developer, but he doesn’t look like Donald Trump,” said Bowles, the think tank’s executive director. “He really had a vision. It wasn’t just the profit-at-all-costs vision.”

O’Connell grew up across the borough line in Cambria Heights, Queens, the son of a teacher and a police officer. Much of his extended family—almost all of whom were also public servants—lived there and had a big effect in shaping his views. One lesson from his father particularly affected him.

When O’Connell was a boy, his dad would sometimes bring him to work. On one occasion, they passed a drunken man lying on the sidewalk holding a bottle of Thunderbird wine. O’Connell’s dad turned to him and said, “Remember to treat the judge on the stand and the poor unfortunate on the street the same way.”

“I had very good examples,” O’Connell said. “It was valuable to give back to your community in any way you could, so I guess that has been with me.”

After graduating from State University of New York, Geneseo in 1964, O’Connell became a substitute teacher during the day and a cop at night. He started on the tactical patrol force, working in high crime areas, mostly in Manhattan. Some of his time was spent patrolling the Upper West Side, where an urban renewal project sparked his interest in real estate.

“I began to look at the brownstones and the details that were there and the old world craftsmanship,” he said. “They were beautiful buildings, each one a little different.”

O’Connell couldn’t afford Manhattan, so he looked to Brooklyn. In 1967, with a loan from his parents, he bought his first property on Henry Street in Cobble Hill for $22,000. It’s now worth $2.5 million.

He continued buying throughout Brooklyn while working for the police, becoming a narcotics detective and then a precinct detective before retiring in 1981 to focus on real estate. His biggest score was in 1992, when he bought several abandoned warehouses from the Port Authority of New York and New Jersey for $450,000. Those buildings are now worth more than $170 million.

O’Connell said his goals in Red Hook were to maintain the neighborhood’s historical significance, attract small businesses to create jobs for local residents and open the waterfront to the public.

Artists now live and work in the waterfront warehouses, and an old factory building is home to the city’s largest ice cream production facility. The sounds of fog horns, power tools and trucks backing up mingle with the scent of burning meat from Hometown Bar-B-Que on Van Brunt Street. The Fairway sits in an old coffee warehouse, which is also home to nonprofits and luxury apartments with views of Lower Manhattan.

A few blocks off the bustling waterfront sits an enormous public housing project: Red Hook Houses. While much of the neighborhood has been transformed, that area is largely unchanged, said Jill Eisenhard, founder of the Red Hook Initiative, one of the nonprofits that rents from the O’Connell Organization at a discount.

Two Red Hook census tracts are designated as opportunity zones: one on the waterfront, the other comprising the projects. While the program is designed to benefit low-income communities, many states awarded the designation to areas that were already gentrifying, with the hope of attracting investors to boost them further. New York State, advised by the New York City’s economic development corporation, picked several waterfront zones, including the Brooklyn Navy Yard and Long Island City in Queens.

Eisenhard said she’s worried all the investment will go to the waterfront, speeding up gentrification there, with little to no benefit for Red Hook House residents.

“It’s just going to increase the divide,” she said. Eisenhard imagines multimillion-dollar condos sprouting up across the street from housing authority buildings that “are literally crumbling or on the brink of being uninhabitable.”

O’Connell said he shares her concerns. A doorman at one of O’Connell’s buildings lives in the Red Hook Houses, and told the developer his family couldn’t cook Easter dinner because the gas wasn’t working.

“It’s a shame,” said O’Connell, who has donated land to the Fifth Avenue Committee to build affordable housing. “Let’s take what’s existing and build on that and improve on that before you start expanding.”

O’Connell said he’s no longer buying properties in Red Hook because he can’t afford the development costs. Now “basically retired,” he splits his time between Brooklyn and a home in upstate New York, where he’s also bought dozens of properties near Geneseo to help other communities “take back their Main Street.”

One of his sons, Gregory, now runs the O’Connell Organization from a repurposed warehouse on Red Hook’s waterfront. As he passes along the business, O’Connell said he hopes his son will have his same sense of duty to the community.

“Most people haven’t learned that not everything is dollars and cents,” he said. “I’m hoping that my children understand that, and I think they do.”

—With assistance from Caleb Melby and Noah Buhayar.

To contact the editor responsible for this story: Pierre Paulden at ppaulden@bloomberg.net, Steven Crabill