AstraZeneca to Pay Daiichi Sankyo Up to $6.9 Billion in Cancer Drug Deal

A class of drugs is emerging that can attack cancer cells in the body without damaging surrounding healthy ones. They have the potential to replace chemotherapy and its disruptive side effects, reshaping the future of cancer care.

The complex biological medicines, called antibody drug conjugates (ADCs), have been in development for decades, and are now generating renewed excitement because of the success of one ADC in late-stage testing, a breast cancer treatment called DS-8201.

The fervor over ADCs is such that AstraZeneca Plc (AZN.N) in March agreed to pay as much as US$6.9 billion to jointly develop DS-8201 with Japan’s Daiichi Sankyo Co. (DSNKY.PK), the British drugmaker’s biggest deal in more than a decade. The investment was widely seen to be a validation of DS-8201’s potential — and the ADC class of drugs as a whole — as an alternative for chemotherapy, the most widely used treatment, for some types of cancer.

DS-8201, which will be filed for U.S. approval by the end of September, is so well-regarded that some analysts already predict it will surpass the US$7 billion in annual sales for Roche Holding AG’s (RHHBY.PK) breast cancer drug Herceptin, which it aims to replace.

“DS-8201 may become one of the largest cancer biologic drugs,’’ said Caroline Stewart, an analyst at Bloomberg Intelligence who estimates sales of the drug to eventually approach US$12 billion globally. That’s a level that has been attained by only a handful of biologic drugs, which are produced from extracts of other living organisms. 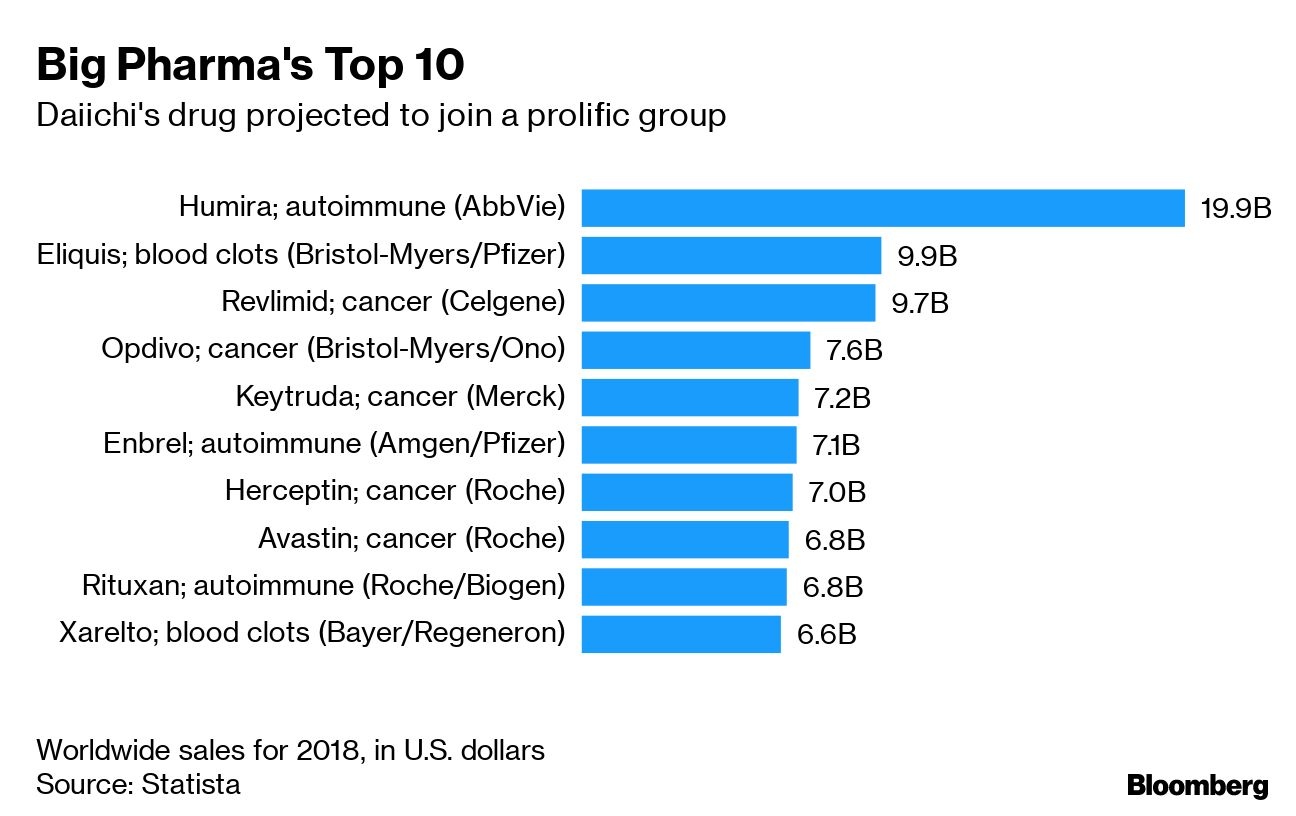 Analysts say DS-8201 could triple the number of patients who get powerful targeted treatment for breast cancer, the most common tumor in women that kills more than half a million annually. As importantly, its ability to target cancer cells without affecting normal cells is a key advantage over the take-no-prisoners approach of chemotherapy.

DS-8201’s full potential is still years away, as it will take time for data to validate the drug’s efficacy in a wide range of patients. Still, the potential of ADCs is already jolting Big Pharma. Roche, whose Herceptin loses patent exclusivity in the U.S. this year, has added ADCs to its portfolio with its Kadcyla breast cancer treatment. Pfizer Inc. (PFE.N) has Mylotarg, an ADC that treats myeloid leukemia.

About 56 pharmaceutical companies are developing ADC candidates, including ImmunoGen Inc. and Seattle Genetics Inc., and they could be targets for acquisitions or licensing deals from global pharmaceuticals anxious for a piece of the ADC pie, according to Cowen Inc.

“ADCs are being positioned as a chemo replacement,’’ Cowen analysts including Boris Peaker wrote in an April note. “There is significant potential for partnership activity.’’

The global ADC market was valued at US$1.57 billion in 2017 and is projected to grow 26 per cent every year through 2025 to almost US$10 billion, according to a report by Grand View Research.

The concept behind ADCs was envisioned in 1900 by German Nobel laureate Paul Ehrlich, who formed the idea of a “magic bullet” in which a single toxic molecule would be delivered to attack a diseased cell without damaging surrounding healthy cells.

The actual use of ADCs began in 2000, but the interest in the sector cooled down as many failed to live up to expectations. The therapies belong to a broader category of cancer immunotherapies that include Merck & Co.’s (MRK.N) Keytruda and Novartis AG’s (NVS.N) CAR T-cell therapy Kymriah that harness the immune system to kill tumors.

Daiichi Sankyo’s drug takes ADCs to another level. Its advantage is that it carries eight payloads stably to cancer cells, double the number of the industry standard, said Toshinori Agatsuma, head of oncology research at Daiichi Sankyo who led a team that discovered the therapy.

“Currently available ADCs are far from being perfect technically because the payload linked to antibodies aren’t properly delivered to cancer cells,’’ said Agatsuma. “We wanted to challenge and improve that. We were a latecomer in biotech, but I knew it was an area where we could catch up, compete and win.’’

About 2.1 million women are diagnosed with breast cancer each year, according to the World Health Organization. Some 18 per cent of cases are driven by a protein called HER2, and their first treatment is chemotherapy alongside Roche’s Herceptin and Perjeta, a related drug. While DS-8201 is currently in testing for later-stage cancer, the plan is to go up against the first-line treatment in the next two years.

“It would be transformative” if the drug were to become the sole first-line treatment, said David Fredrickson, president of AstraZeneca’s oncology business. “If we can eliminate the side effects associated with chemotherapy, that would be a tremendous benefit for women.”

Drugs like Herceptin only target high levels of HER2, and women with lower levels must rely on hormone therapy or chemotherapy. That’s where DS-8201 has the potential to serve far more patients, treating those with both higher and lower levels of HER2.

“We need more evidence, but my gut feeling is that DS-8201 is the most effective among existing medicines targeting HER2 positive patients, including Herceptin and chemotherapy,’’ said Shunji Takahashi, deputy director at the Cancer Institute Hospital of the Japanese Foundation for Cancer Research, who took a part in an early-stage DS-8201 trial. He noted that interstitial pneumonia is a concern as a side effect, and needs to be monitored.

For Daiichi Sankyo, the development of DS-8201 has helped resurrect the Japanese company after it struggled for years to set a path for growth, weighed down by a failed acquisition of India’s Ranbaxy Laboratories Ltd. and a shortage of blockbuster products.

“A single drug has a potential to transform Daiichi Sankyo and I didn’t expect it a year ago,’’ SMBC Nikko Securities Inc. analyst Yasuhiro Nakazawa said. “Daiichi Sankyo had a track record of betraying market expectations with previous drug developments. But with this one, I can really feel that it’s different this time.’’

—With assistance from John Lauerman