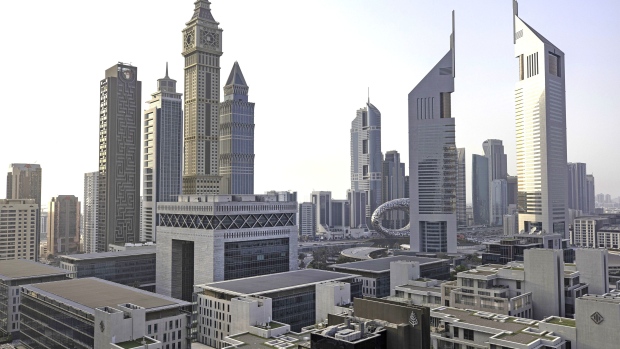 The Gate building, centre left, in the Dubai International Financial Centre (DIFC) in Dubai, United Arab Emirates, on Monday, July 5, 2021. Credit Suisse AG Chairman Antonio Horta-Osoriohas vowed to undertake a globalcorporatestrategy review after taking over in the wake of a pair of disasters. , Bloomberg

Izzy Englander’s Millennium Management has grown its staff in the Dubai International Financial Centre to about 30 since securing a license in 2020. Michael Gelband's ExodusPoint Capital Management, one of the largest multi-strategy hedge funds in the world, registered in the DIFC in June, according to a filing.

All Blue Capital ditched its London headquarters to base itself in the city, where it now has almost half its global staff. Michael Platt’s private investment firm BlueCrest Capital Management is also expanding in the emirate, with former Citadel money manager Chris Wheeler among those hired.

They are part of a growing clutch of firms choosing to expand in the sun-splashed business hub. Brexit has spurred many funds to seek new bases outside the City of London, while some traders have fled Hong Kong’s strict Covid restrictions. And with living costs soaring around the world, Dubai’s tax-free welcome mat has seldom looked so appealing.

“We are in a unique situation where the classic financial centers are disintegrating,” said Tom Kirchmaier, professor at the Centre for Economic Performance at the London School of Economics. “Living in Dubai -- that’s now come down to personal preferences with low taxes, good infrastructure and low regulation.”

For fund managers making the move, the city offers a fertile ground of high net worth individuals and institutional investors. The United Arab Emirates is set to attract a net inflow of 4,000 millionaires this year, the most of any country globally, according to consultancy Henley & Partners.

Higher oil prices are another draw. Crude above $100 a barrel is buoying Gulf economies and markets, prompting the region’s sovereign wealth funds to invest the windfall at home and abroad.

“It’s not a coincidence that you have a lot of asset managers and hedge funds and other institutional investors that actually moved or set up offices in the region here,” Arshad Ghafur, Bank of America’s president for the Middle East and North Africa, said at DIFC Fintech Week. “That’s to really capitalize on what’s happening here.”

Dubai’s current effort to attract financiers isn’t its first. Private bank Mirabaud in 2008 predicted a regional hedge fund boom that failed to materialize after the financial crisis took its toll on the industry and a series of scandals damaged the UAE’s regulatory reputation.

Some hedge funds have come and gone. Argent Financial Group received a license to operate in the DIFC in 2006 but withdrew three years later. D.E. Shaw set up in the emirate in 2009 but has since left.

The latest push includes a fresh slate of inducements. The Dubai International Financial Centre is offering reduced licensing fees and capital requirements for hedge funds domiciling a domestic fund. Firms within the center manage around $500 billion worth of assets, Salmaan Jaffery, chief business development officer for the DIFC, told Investment Monitor. A team from the business hub recently completed a roadshow in San Francisco and New York to attract more firms.

Such incentives appear to be having an impact even as other cities, including Paris, also try to lure traders. Millennium, which has about $55 billion assets under management, is actively looking to further grow its presence in Dubai, according to people with knowledge of the matter. It has hired Dean Cooper from UBS Group AG, who will move to Dubai from London as the firm expands its emerging markets operations there, people familiar with the matter have said.BlueCrest, which runs Platt’s wealth and that of his partners, is expanding to have 10 people, including at least three portfolio managers, according to people with knowledge of the matter. The firm plans to open an office in the financial district and trade imminently, said the people, who asked not to be identified because the details are private.

London-based Carrhae Capital, an equity hedge fund, is in the process of opening an office in Dubai and currently seeking regulatory approvals, according to a person with knowledge of the matter. The firm, which manages about $800 million, will be moving two investment professionals to the city and the decision is primarily driven by the time zone advantage the firm will get for its emerging markets focused research and trading, the person added.

Dubai in recent months has been taking steps to attract foreign talent just as rigid Covid-19 rules and the increasing influence of mainland China lessens the appeal of Hong Kong, which has lost thousands of professionals to other centers.

“It makes sense with lockdowns in Asia that financial centers like Dubai are becoming a destination for hedge funds,” said Whitney Baker, the New York-based founder of Totem Macro and former head of emerging markets at Bridgewater Associates.

The Hong Kong Investment Funds Association, which represents firms with more than $52 trillion in assets under management, last month called for the city to scrap quarantine rules for travelers and open up to the rest of the world to restore its status as an international financial center.

Stricter visa requirements, hiring restrictions and other bureaucratic road blocks are also limiting Singapore’s appeal to money managers. The country has also made it harder for rich foreigners to create family offices, raising the minimum bar for local assets under management and other conditions to get key tax concessions.

While favorable immigration policies and regulation makes it easy for firms to set up business in the city, they also come with risks.

Dubai is coming under increasing international scrutiny for its struggles in combating money laundering. The global financial crimes watchdog, the Financial Action Task Force, in March placed the UAE on its gray list. The Gulf state has also emerged as a preferred destination for Russia’s wealthy even as other jurisdictions increasingly sanction and shun them.

Matt Novak, managing partner of All Blue Capital, a global investment firm overseeing about $5.7 billion, moved his firm’s headquarters to Dubai from London in March and expects to have almost 30 members of its roughly 80-person team based in the city by the end of the year.

“The Dubai government was very clever in its approach to Covid,” he said. “They made it easy for us to conduct business and bring over staff. It’s no wonder they attracted us and many of the industry’s juggernauts.”