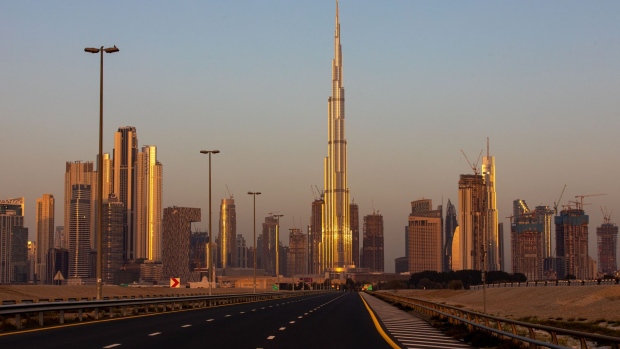 An empty highway leads towards the Burj Khalifa skyscraper, center, and other office buildings on the city skyline during the coronavirus lockdown in Dubai, United Arab Emirates, on Friday, April 24, 2020. An investment firm backed by a member of Abu Dhabi’s royal family agreed to buy a stake worth just over $1 billion in LuLu Group International, which runs one of the Middle East’s largest hypermarket chains, according to people familiar with the matter. Photographer: Christopher Pike/Bloomberg , Bloomberg

Dubai shares climbed the most in the Gulf on after OPEC+ agreed to a one-month extension of its record output cuts, underpinning the recovery in oil prices.

Major oil producers decided at the weekend on a production-curb extension as well as a stricter approach to ensuring OPEC members don’t break their pledges. Brent crude rose 19% last week in anticipation of the meeting, in the sixth consecutive weekly advance, with shares in developed and emerging markets also jumping.

“The recovery in oil prices and further extension of record production cuts by OPEC+ until the end of July will have a positive impact on domestic markets,” said Iyad Abu Hweij, a managing partner at Allied Investment Partners PJSC in Dubai.

Read more about how the production cut extension is a win for the Saudi-Russian alliance.