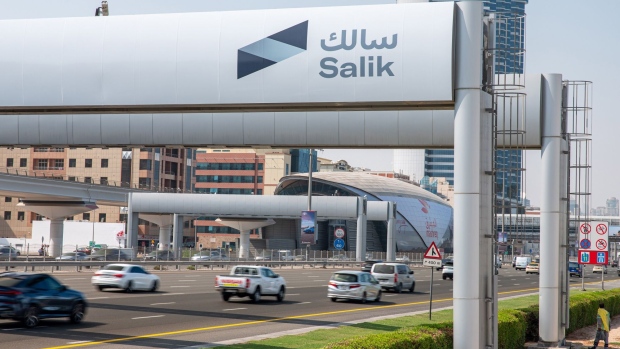 Salik PJSC advanced 20% to 2.40 dirhams. The government sold 1.87 billion shares at 2 dirhams each, raising the equivalent of $1 billion and a market capitalization of $4.1 billion.

Salik is Dubai’s third IPO of the year. It follows those of the city’s main utility, Dubai Electricity & Water Authority, and business park operator Tecom Group. They are part of the government’s plan to list 10 state firms to enhance liquidity and the size of its exchange.

The Middle East has been one of the most active IPO markets in 2022, a year otherwise marked by stock selloffs and recession fears. Elevated oil prices and investor inflows drove deals in Dubai, Abu Dhabi and Saudi Arabia, and the deals pipeline still remains busy.

Arabic for open, Salik is an automated system introduced in 2007. Each time a vehicle passes through one of the city’s eight toll points, four dirhams ($1.09) are charged to a prepaid account, eliminating the need for cash or toll booths. The firm is a critical asset for Dubai, where about 60% of commuters use private cars, and net toll traffic grew at a compound 5.5% annual rate between 2013 and 2019.

Salik’s Chief Executive Officer Ibrahim Al Haddad told Bloomberg TV on Wednesday the firm was “well-positioned to benefit” from Dubai’s 2040 master plan, which aims to increase annual visitor numbers to 25 million by 2025, and host more than 400 global events in the next few years.