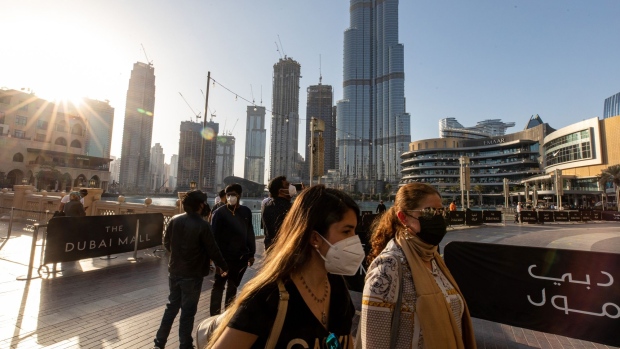 Tourists wearing protective masks walk near the Dubai Mall and the Burj Khalifa skyscraper in Dubai, United Arab Emirates, on Wednesday, Jan. 27, 2021. Dubai replaced its top health official on Sunday after coronavirus cases in the United Arab Emirates, of which it is part, spiked in recent weeks. Photographer: Christopher Pike/Bloomberg , Bloomberg

Dubai’s key tourism sector is unlikely to rebound for at least a year, according to S&P Global Ratings.

While the city will witness a modest recovery this year helped by one of the world’s highest vaccination rates, “weak international tourism is likely to drag on the economy until late 2022 at the earliest,” Ratings Credit Analyst Trevor Cullinan said on Tuesday.

Last year, S&P estimated Dubai’s gross domestic product would contract about 11%, given the impact of coronavirus on sectors including travel and tourism that contribute more than a third of the city’s economy. Dubai also has a “sizable” overall public debt burden projected at around 141% of GDP, according to S&P.

The city is hosting the World Expo 2020 this year, and it hopes to attract millions of tourists to help solidify an economic recovery. The first 10 days of the event saw 411,768 ticketed visits.

The United Arab Emirates, of which Dubai is a part, has shunned lockdowns since emerging from one last summer. The infection rate in the Gulf nation has dwindled amid an aggressive testing and vaccination campaign.