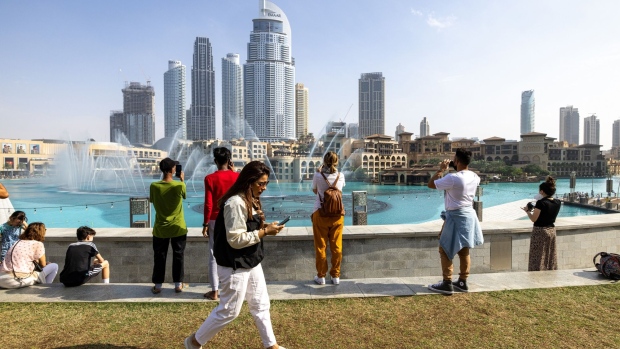 Tourists watch the water fountain display near the Burj Khalifa skyscraper, in Dubai, United Arab Emirates, on Sunday, Jan. 2, 2022. Dubai set out another expansionary budget for this year as the Middle Eastern business hub seeks to offset the impact of the coronavirus pandemic and keep its economy on a growth trajectory. , Bloomberg

Dubai’s government-owned power and water utility credited a post-pandemic recovery in tourism for helping spur a 34% jump in first-quarter profit.

Dubai Electricity and Water Authority Pjsc, which made its trading debut last month, said it expects continued population growth in Dubai to support future earnings and bolster profit. Shareholders will get an interim dividend of at least 3.1 billion dirhams ($844 million) this year, which DEWA will distribute in October. The stock rose as much as 2.7% to 2.68 dirhams.

Dubai, a commercial and tourism hub of the United Arab Emirates, has benefited by remaining relatively open to visitors and allowing largely free movement through much of the pandemic to support its vital hospitality and tourism industry. Persian Gulf oil exporters like the UAE, which is the third-largest member of OPEC, are also reaping gains from oil that’s risen above $100 a barrel this year as Russia’s invasion of Ukraine roiled global markets.

Even amid that volatility, Dubai sold 18% of DEWA shares in the world’s second-biggest IPO so far this year, receiving more than $85 billion of orders. The government-owned utility nearly tripled the amount of stock for sale due to high demand.

DEWA’s first-quarter profit attributable to shareholders rose to 735 million dirhams from 547 million dirhams as sales jumped 16% to 5.1 billion dirhams. The utility sees the number of Dubai residents rising to 5.8 million by 2040 from 3.5 million now.