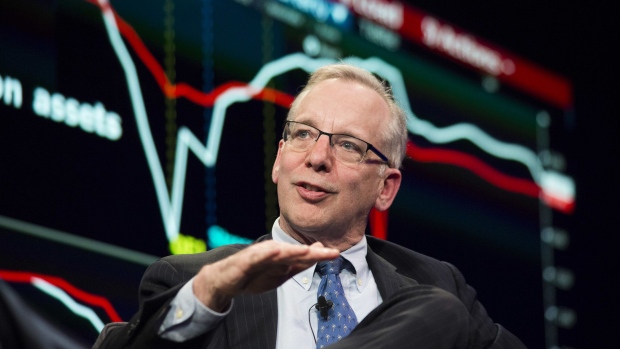 William Dudley, president and chief executive officer of the Federal Reserve Bank of New York, speaks during an interview in New York, U.S., on Friday, May 4, 2018. Dudley said he is optimistic about U.S. growth, while adding it's too early to judge that the economy had overcome persistently low inflation. , Photographer: Gaia Squarci/Bloomberg

“They’re not going to react to small market moves and defer the tapering on that basis. They have to change their economic forecast,” he said Monday during an interview on Bloomberg Television with Lisa Abramowicz, Tom Keene and Jonathan Ferro. “At this point it’s really premature to reach that conclusion.”

U.S stocks followed other indexes lower on Monday as investors vexed over the risk of contagion from the debt crisis at developer China Evergrande Group, which is fueling concerns about China’s growth.

What happens in China matters to the global and U.S. economy, Dudley said, but he expects that Fed officials gathering this week would still signal they’re on track to taper at their November meeting.

Dudley, a Bloomberg Opinion columnist, also said the Fed “should be a little more flexible” on when it will raise interest rates in order to assure Americans that it intends to keep inflation in check.

“If inflation expectations truly become unanchored that’s a problem for actual inflation and I would think they’d have to react,” he said. On the other hand, if more officials project a rate increase next year “that may reduce the concerns about the Fed being late,” Dudley added.

Policy makers will releases their latest quarterly forecasts alongside a policy statement at 2 p.m. in Washington on Wednesday, including a fresh dot plot of interest-rate projections through 2024.