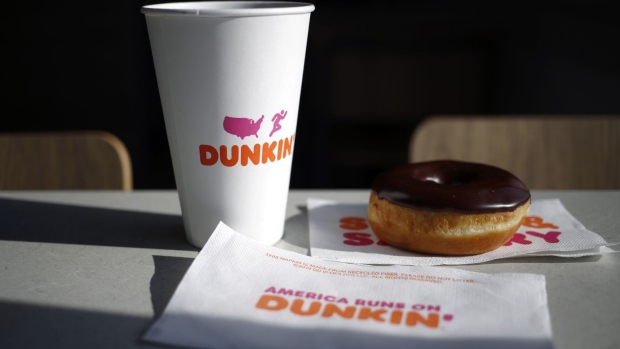 A half-dozen box of donuts sits on the counter inside a Dunkin' location in Mount Washington, Kentucky, U.S., on Thursday, Jan. 30, 2020. , Luke Sharrett/Bloomberg

The New York Times reported the talks earlier, saying Inspire will take Dunkin’ private at US$106.50 a share, citing two people with knowledge of the negotiations who weren’t identified. The deal -- valued at US$8.8 billion -- could be announced as soon as Monday, the newspaper added. The price is a 20 per cent premium over Friday’s closing price, when the company had a market capitalization of US$7.3 billion.

“Dunkin’ Brands confirms that it has held preliminary discussions to be acquired by Inspire Brands,” Karen Raskopf, a Dunkin’ spokeswoman, said in a statement, declining to offer further details and cautioned that there’s is no certainty an agreement will be reached.

Shares of Dunkin’ Brands have more than doubled since March on investor optimism that its mobile ordering app and loyalty program boosted sales during the pandemic. The Canton, Massachusetts-based company dropped the word “Donuts” from its name in 2018, signaling its broadened focus on beverages. The stock traded at 34 times earnings, lower than the median multiple of 37 for the industry, according to data compiled by Bloomberg News.

The number of coffee shops in the U.S. is shrinking for the first time in nine years as sales plunge and COVID-19 forces the industry to rethink its business. While that’s helped Dunkin’ and other coffee-serving chains such as Starbucks Corp. and even McDonald’s Corp. gain ground at the expense of independent outlets, it’s not enough keep all its stores operating.

The U.S. will have 25,307 outlets specializing in coffee or tea at the end of 2020, down 7.3% from a year earlier in the first decline since 2011, according to estimates by research firm Euromonitor International. Annual sales are expected to plunge 12 per cent to US$24.7 billion.

Dunkin’ said in July it expects to close about 800 U.S. locations permanently this year as part of a “real estate portfolio rationalization.” Comparable-store sales have been improving in July, Dunkin’ said, but they remain in the “low-single digits” for stores of both key brands at the time.

Inspire Brands, the owner of Buffalo Wild Wings and Jimmy John’s, is backed by the Atlanta-based private equity firm Roark Capital. In April, Roark made a US$200 million investment in Cheesecake Factory Inc.

In 2005, Dunkin’ Brands was sold by Pernod Ricard to a group of buyers including Bain Capital, the Carlyle Group and Thomas H. Lee Partners for US$2.4 billion. It was taken public in an initial public offering in 2011.