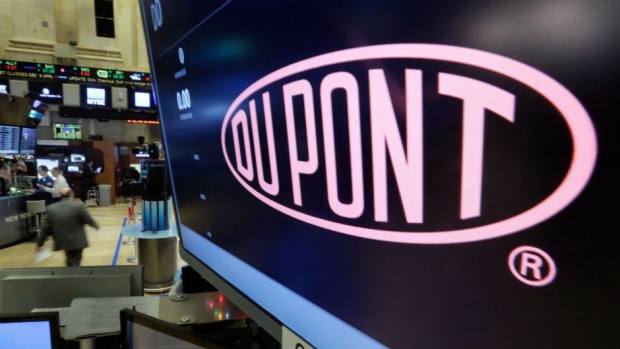 the company name of Dupont appears above its trading post on the floor of the New York Stock Exchange. , The Canadian Press

Chemicals and seeds producer DuPont said on Tuesday it expected its merger with Dow Chemical Co. (DOW.N) to close in the first half of the year, suggesting it will take longer than previously estimated to win approvals for the US$130 billion deal.

Previously, the companies said they hoped to wrap up the transaction in the first quarter of 2017.

DuPont, which also reported a better-than-expected profit for the sixth straight quarter, said it continued to have constructive discussions with regulators in key jurisdictions.

This is at least the second time the two companies, which have been in talks with EU antitrust regulators to save their merger, have had to push back the expected completion period.

DuPont also said it expected its profit in the current quarter to fall 18 per cent from a year earlier due to a charge of 15 cents US per share related to the Dow deal.

Operating profit, which excludes one-time charges, is expected to rise about 8 per cent, helped by cost cutting and increased seed deliveries.