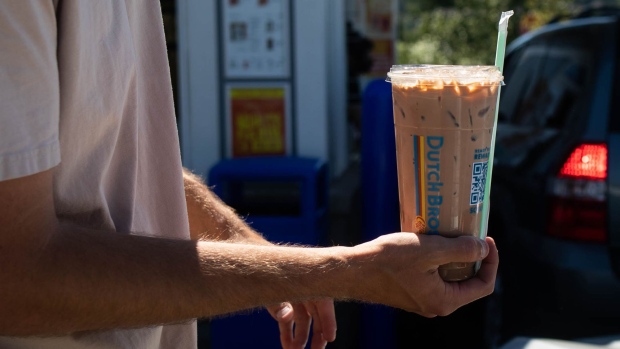 An employee delivers a drink to a customer outside a Dutch Bros. Coffee location in Beaverton, Oregon. , Photographer: Maranie Staab/Bloomberg

(Bloomberg) -- Coffee chain Dutch Bros Inc. rose as much as 74% in its trading debut after exceeding goals for its initial public offering to raise $484 million.

The company, backed by consumer-focused private equity firm TSG Consumer Partners, sold about 21 million shares Tuesday for $23 each, after marketing them for $18 to $20.

“We’re not necessarily a coffee business,” Chief Executive Officer Joth Ricci said in an interview. “We’re a beverage company. We offer a strong base of business across our entire menu.”

Still, the company is facing higher costs for key supplies, such as aluminum that it uses to package its Blue Rebel energy drinks, Ricci said.

“There’s been the supply-chain issue on aluminum now for the last couple of years,” he said. “That’s the one that’s the most challenging right now.”

Dutch Bros is based in Grants Pass, Oregon, where it was founded in 1992. It now operates more than 470 cafes in 11 states, with its same-shop sales figures having grown 2% in 2020 through the coronavirus pandemic, according to its filings with the U.S. Securities and Exchange Commission.

Travis Boersma, co-founder and executive chairman of Dutch Bros, has about 74% of the shareholder voting power after the listing through his ownership of Class B stock, which carries 10 votes per share.

The offering was led by Bank of America Corp., JPMorgan Chase & Co. and Jefferies Financial Group Inc. The shares are trading on the New York Stock Exchange under the symbol BROS.