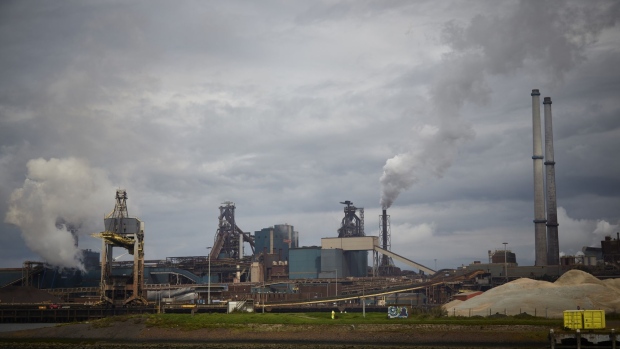 IJMUIDEN, NETHERLANDS - AUGUST 22: View of the Tata Steel plant from a sluice on August 22, 2021 in Ijmuiden. The Tata steel plant is under investigation by the Dutch Public Prosecution Service for alleged violations of their environmental permit. The steel plant in IJmuiden is the largest employer in the region with some 9,000 employees and another 20,000 related workers. (Photo by Pierre Crom/Getty Images) , Photographer: Pierre Crom/Getty Images Europe

(Bloomberg) -- The Dutch public health agency found higher concentrations of metals and carcinogens around Tata Steel Ltd.’s IJmuiden factory in the Netherlands than the company’s own figures, potentially adding more pressure on the company to clean up its plants sooner than anticipated.

“The measured quantities of metals and polycyclic aromatic hydrocarbons (PAH) are much higher than had been expected on the basis of calculations with data from” the company’s environmental annual reports, according to a Friday report published by the National Institute for Public Health and the Environment, or RIVM. “These emissions data do not appear to have been supplied in full,” the report said.

In September, the company announced plans to convert its Dutch IJmuiden steelworks to run on hydrogen amid mounting political pressure to clean up the site’s operations. For the steelmaker and its peers, cleaning up existing plants requires expensive upgrades, squeezing finances that have frequently been strained by global steel overcapacity.

“In the next eight years, IJmuiden will change into a manufacturing site with fewer chimneys,” Hans van den Berg, chairman of Tata Steel Netherlands, said last year in a filing. “We will work closely together with local and national authorities and our direct neighbors to become a green steel manufacturer.”

An earlier RIVM study found higher-than-usual concentrations of carcinogenic metals in dust collected from IJmuiden’s surrounding areas. The mill has faced legal proceedings from local residents and was the subject of a debate in the country’s parliament.

“The results corroborate the previous conclusion that a significant proportion of the metals and PAH in coarse particulates originate from Tata Steel’s site, particularly in Wijk aan Zee,” the agency said in its latest report.

“We take it very seriously and will now study it closely. We are deeply aware and affected by the concerns of people in the vicinity of our factories,” Tata Steel said in an emailed response. “Our aim is to make improvements as quickly as possible, so it is important for us to understand the deviations that have been found. That is why we would like to talk to RIVM as soon as possible,” the company added.