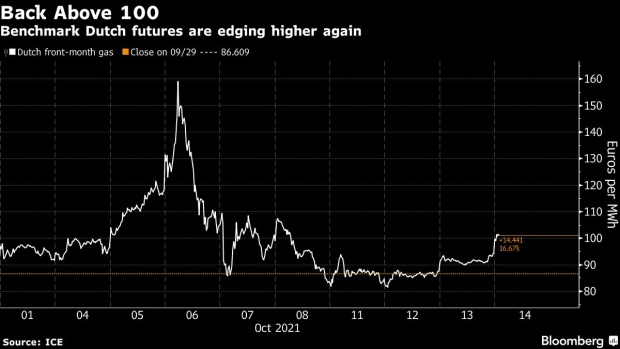 (Bloomberg) -- The European gas benchmark surged back above 100 euros a megawatt-hour as traders shrugged off Russia’s pledge to deliver as much as the continent needs.

Europe’s largest gas supplier is raising deliveries in line with requests from customers and is “prepared to discuss any additional steps” to stabilize the market, President Vladimir Putin said on Wednesday. He blamed the region’s energy crisis on flawed policies rather than a lack of supply.

Despite Putin’s assurances, European gas prices continued to rise. The Dutch front-month contract climbed as much as 10% on Thursday to 102.96 euros a megawatt-hour, exceeding 100 euros for the first time since last Friday. The U.K. equivalent jumped as much as 9.9%.

“The market seems to consider that the renewal of the historical partnership Putin is asking for from Europeans -- with a clarification on the role of gas in their energy mix -- could take time to materialize to resolve the short-term problem they are facing,” Engie EnergyScan said in a report. European gas is also probably getting a boost from rising Asian coal prices, it said.