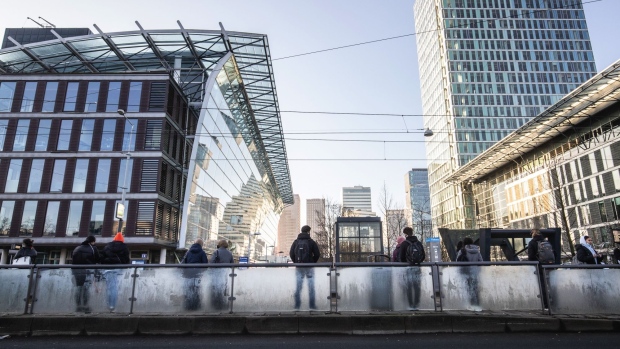 Morning commuters at a tram stop near skyscraper offices in the Zuidas business district in Amsterdam, Netherlands, on Tuesday, March 2, 2021. Amsterdam overtook London as Europe's largest share trading center in January after Brexit saw about half of the city’s volumes move to the continent. , Bloomberg

(Bloomberg) -- The Dutch government is working on a plan to introduce a maximum salary threshold for expatriates who want to take advantage of a tax break, according to two people familiar with the matter.

The government is planning to allow only individuals earning less than 216,000 euros ($224,000) a year to apply for a benefit that exempts 30% of an expat’s salary from income tax for five years, the people said, speaking on condition of anonymity as the details have not been made public. The plan is as part of an effort to free up fiscal space, the people said.

Prime Minister Mark Rutte’s government hasn’t publicly announced a plan to change the tax benefit that seeks to attract talent to the Netherlands. The Dutch Finance Ministry declined to comment.

“Skimping on this arrangement for foreign (including technical) talent - in any form whatsoever - is not a good move,” Confederation of Netherlands Industry and Employers said in an emailed statement. “The scheme yields more than it costs society.”

The plan also drew the ire of dozens of Dutch technology companies that rely on foreign talent. Technology companies including ASML Holding NV and Adyen NV last week called on the Dutch government to maintain the tax break in its current form.

“Between 15% and 70% of our employees come from outside the Netherlands,” executives including ASML Chief Executive Officer Peter Wennink, Adyen Chief Financial Officer Ingo Uytdehaage and Flow Traders NV CEO Dennis Dijkstra said last week in a letter to the government seen by Bloomberg. The tax benefit is essential to attracting international talent, the executives said.

Rutte’s previous cabinet decided in 2018 to reduce the tax benefit from eight to five years.