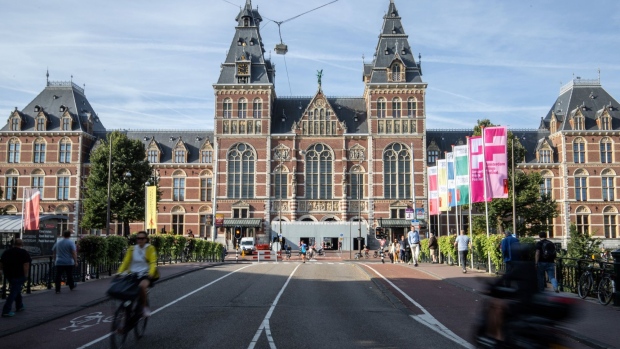 (Bloomberg) -- Inside Amsterdam’s Rijksmuseum, Rembrandt’s masterpiece The Night Watch appears to be hanging straight, as do other famous works by Vermeer and Van Gogh. While standing outside the gargantuan red-brick building, however, eagle-eyed engineers noticed the museum was sinking 15 centimeters (6 inches) to one side.

Like most buildings built before 1970 in this marshy country, the Netherlands’ national museum rests on a foundation of wooden poles — about 8,000 of them. But as dry summers caused groundwater levels to plunge, the poles were exposed and fungi began to rot the foundations. It required a team of specialist hydrogeologists to fix the problem.

While the Dutch have long feared that climate change would see their homes engulfed by rising sea levels, Europe’s record drought is showing that too little, not too much water, could spell disaster. As many as one million Dutch houses built on pile foundations face similar problems to the Rijksmuseum and are at risk of collapse.

Only a small group of engineers have the expertise to tackle the issue and it may cost as much as 100 billion euros ($100 billion) to fix all households that are sinking due to retreating groundwater, according to Peter Boelhouwer, professor of housing systems at the Delft University of Technology. With Europe in the throes of what appears to be its worst drought in at least 500 years, the problem may not be confined to the Netherlands, with wooden pile foundations also used in parts of Sweden, Germany and extensively in Italy’s Venice.

The fungi, which need oxygen to survive, “literally eat away the wooden poles, to the point they lose stability,” said Maarten Kuiper, a hydrogeologist at engineering company Dareius, which was hired to help save the Rijksmuseum. “They really are slow and silent killers.”

As a changing climate continues to ravage the continent, the Dutch are having to rethink their strategy of water management — trying to lock in groundwater instead of keeping the sea out.

Kuiper and his team installed an infiltration system at the museum, directing water from a pond to prevent soil from drying out. “We’re controlling the groundwater levels via pumps and pipes,” he said. “We’re measuring it each hour.”

Such a system could be used to protect homes, with a water pump and sensors installed for housing blocks, said Kuiper. That would reduce the period that foundations are exposed to the air during dry spells and slow the rot. Without such remediation, homes could collapse within a decade unless pilings are replaced, he said.

For its part, the government has focused on co-funding research and providing advice to local authorities and an association of affected homeowners. A new national platform that will centralize and pool knowledge is due to be launched in the next few months, said Marcus Polman of the Netherlands Enterprise Agency, which carries out policy for the Ministry of Economic Affairs and Climate Policy.

The agency said there is a 20-million-euro national fund to help the most distressed homeowners refit foundations and it hopes that might be increased by early 2023. But without a massive cash injection, the bill will continue to lie squarely with homeowners. And without an obligation to carry out foundation checks before buying a home, many people in the Netherlands get a surprise bill years into home ownership — at an average cost of 60,000 to 80,000 euros per house, according to Kuiper.

The insurance sector is unlikely to pay out for refitting foundations anytime soon. Without government support for such macro climate risks “we cannot take it upon ourselves as an industry,” said David Knibbe, chief executive officer of insurer NN Group NV.

Even with adequate funding, a shortage of qualified engineers will slow down remediation efforts, according to Jaap Estié, president of the Dutch Foundation Builders’ Association.

“Foundation work is already a niche, so wooden pole foundation work is really a niche within a niche” said Estié, who estimates there are only about 25 companies in the Netherlands that can do the work. The capacity crunch is being compounded by global supply chain snags for building materials and red-hot construction demand in an already tight housing market.

The techniques developed in the Netherlands could benefit cities such as Venice, Gothenburg in Sweden and several cities in the Baltics where pile foundations are common.

“The Netherlands is a country where water knowledge and management has always been a very big export product,” Estié said. “If we collect the knowledge here we could help other parts of the world which face similar problems.”