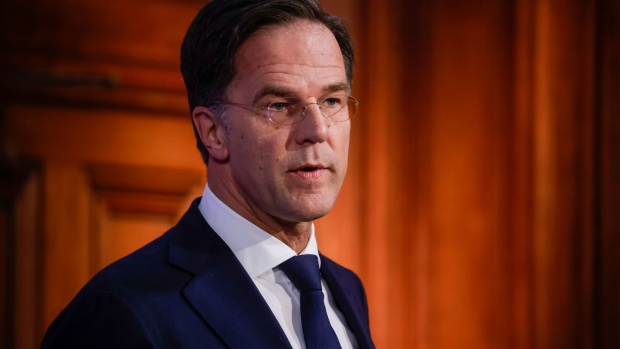 Mark Rutte, Netherland's prime minister, speaks during a joint news conference, with Boris Johnson, U.K. prime minister, and Justin Trudeau, Canada's prime minister,on the war in Ukraine, in London, U.K., on Monday, March 7, 2022. We will "be discussing how to continue to support Ukraine, how to strengthen democratic values around the world and how to stand up even more for democracy, to stand against Russian aggression," Trudeau said ahead of his visit to London. , Bloomberg

(Bloomberg) -- Dutch Prime Minister Mark Rutte asked the European Union’s executive arm to clarify its guidelines on how buyers should pay for gas from Russia, which has demanded payments be made in rubles.

A Russian decree in March required companies buying its gas to open two accounts -- one in euros or dollars and one in rubles -- a move the European Commission initially rejected since the transaction could involve the sanctioned Russian central bank.

The commission has since issued more guidelines aimed at clarifying the issue, which has led companies including Italy’s Eni SpA to interpret the Moscow decree as compliant and to open accounts in the Russian currency. But the commission has never specified in writing whether a ruble account was consistent with its sanctions.

“The European Commission is not very precise, that is the problem,” Rutte told lawmakers in the Hague on Monday. “The Netherlands has asked for clarification on this part of the guidelines.”

The EU guidance specifies that a payment can be made into the euro or dollar account, but then the buyer would need to declare the transaction finalized.

“As the Dutch government, we say to companies, as long as things are unclear, stay on the safe side,” Rutte said.

The confusion has thrown markets into disarray, with companies scrambling to find a way to keep crucial energy supplies flowing. The move has also divided the bloc, with Poland and Bulgaria quick to reject Moscow’s demands -- and both had their gas cut off as punishment.