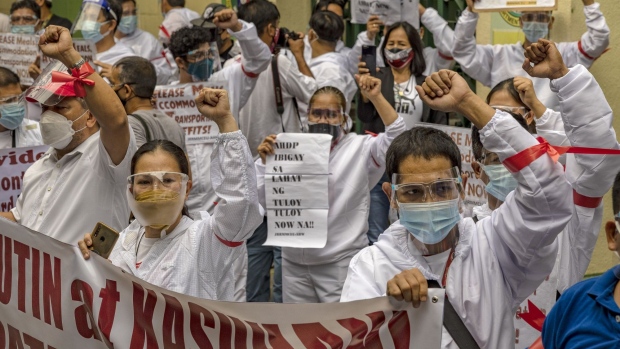 (Bloomberg) -- Philippine President Rodrigo Duterte has ordered the police and the military to augment hospital staffing in the capital region as hundreds of health workers have contracted coronavirus.

At least five major hospitals in Metro Manila that are already running at full capacity have to quarantine infected frontliners and couldn’t accept more patients, Duterte said. About 400 workers in those hospitals have been infected, he said.

The Philippines, a global supplier of nurses, is experiencing a “dearth of supply,” according to Duterte. Medical staff in the Southeast Asian nation last month protested low pay, delayed benefits and government neglect as near-record high daily cases overwhelmed hospitals.

“I am ordering the medical corps of the Armed Forces of the Philippines and the Philippine National Police, please place your human resources on ready, on deck,” Duterte said, according to a transcript of his Wednesday briefing.

Defense Secretary Delfin Lorenzana said the military has started to dispatch nurses to at least one hospital and can fly in more health personnel to Manila if needed.

In the same briefing, vaccine czar Carlito Galvez proposed to start inoculation of children aged 12 to 17 by mid-October as 20 million shots are expected to arrive on top of the country’s 23 million inventory of dosage. With government close to hitting the target it set for December, vaccination can be opened to the general public by November, he added.